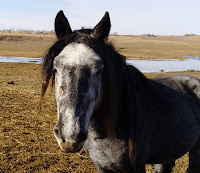 Owning Boyfriend is a joy and a curse.

Watching a six year old, very newly castrated, hardly halter broken horse leery of most people (and frightened of most things a normal horse can take in stride) transform into a self composed, barn favorite, friendly to all, magnificent and intelligent horse... well, I imagine it's a bit how a parent feels. 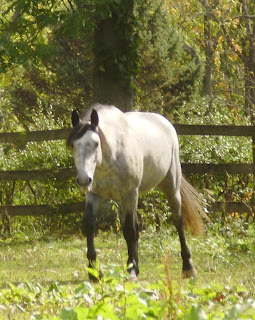 He's been smacked twice by me for a nip, in two years. He is graceful, always conscious of people around him, and next to never offers violence. I trust him more than is wise.

He has lovely ground manners. He is beautiful to look at. He is my joy and my heart.

He has cost thousands and thousands upon thousands for several surgeries and related vet bills, trailering, etc. I could have purchased a REALLY nice horse ready to event, especially in this economy. Ah, hindsight...

I can not ride Bif anymore. I barely had him started under saddle: walk, trot, trail and a few canters when I realized there was definitely something not quite right. I couldn't quite place my finger on it.

One of the best surgeons in the country went in to remove the bone cyst that was visible on the digital radiographs. After he performed the surgery, the cyst being the least of the problems, he told me there was nothing but pasture for Bif, and even then how long he'll be comfortable is uncertain. He has a degenerating stifle joint, with cartilage that is rippled and cracking down to the bone surface. It actually will cause more bone cysts to form. Every movement increases the amount of deterioration. The little cheese grater that is his joint has already started shredding his meniscus from both sides.

The doctor said that he was surprised by how bad the joint was when he got in there; Boyfriend didn't present with the degree of lameness he would have expected for the degree of malformation. I attribute it to both the joint supplement he'd been on for 8 months already by that point, and the fact that he is a "tough old bird", with a very high pain tolerance.

None of it is genetic, neither his face or the stifle joint, just good old fashioned bad luck.

He is comfortable now, as far as I can tell. He gets a comprehensive supplement for his joint, Smartflex Repair. He also gets SmartPak's Smart TLC, which is a non-pharmaceutical pain relief probably as strong as bute, without the unwanted gastric problems and other unfavorable effects.

So, that is the horse that is Boyfriend:

A horse that I chose, despite a pus crusted face from an infected tooth, because he chose me.

Surgery on a face, and months of twice daily detested cleanings, weeks living with his vet, CT scan and surgery again. Not a bit head shy, ever.

The joy of going from a horse that had never had its feet touched, much less held, days of just touching the feet, shifting the weight off it, days of lifting it marginally, of holding it just a second or two; to one who happily holds the next one up as you go around to pick. I can't describe the pride I felt when my six year old did that the first time. Six years of range horse instinct.

A horse that for months would only eat Hilton Herballs, or the beloved Mrs. Pastures cookies, but wouldn't touch any other treat, carrot, apple, you name it. He has finally broadened his tastes.

He can stand quietly in crossties for hours, if needed.

He will watch me, seemingly all the time. Contorting himself if necessary to see where I go as I move about the barn. It is gratifying to be the center of someone's universe.

I'm in the loft to throw his hay. He looks up at me, right in the eye, head craned back and body tilted, waiting... OK, he will do that for anyone in the loft. It is TOO cute. 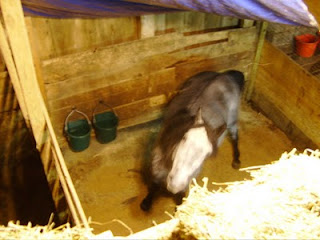 He hates supplements and I soak his grain just right to get him to eat them all and not waste... sigh...

I watch him rest the bad leg more and more, and worry and wonder. I fear that he will suffer more than I know. Will he let me know before it is too bad? Will he just be irrevocably three legged one day?

Boyfriend has been such a blessing. A chance for me to stretch my skills working with unsocialized horses. I've had horses with somewhat limited human contact before him, and turned them out nicely. I have no desire to go as far as an aged BLM caught horse, which is a good thing to know about yourself, too! Limits. I turned out a very nicely mannered horse in Bif. Granted, he's an exceptionally nice tempered animal, I'm not a total glutton for punishment. But I know that my instincts, my basic fundamental belief and system of how to train and work around and educate a horse is sound. That is a gift he has given me.

That I can not take that challenge to the furthest extent, in the saddle and in competition, is perhaps a gift, too. I need to go back to school, get a higher degree, expand my self in other areas, not just in my horse life.

Thanks, Boyfriend, for another great year. I hope for many more with you. 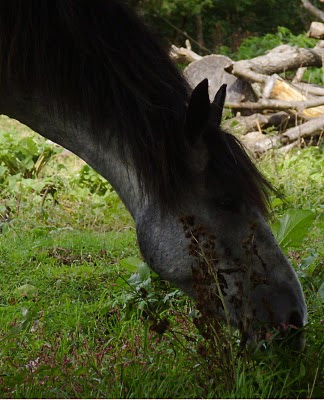