Allow me to describe my yesterday with Mother.

She trundles out to the field and pats me and puts on my halter. We head to the barn porch, which I examine with much interest ~ things have moved, things are missing ~ and she bleats at me to hurry. She claims that is because she needs to close the gate to the barnyard so no wee donkeys escape, and that she hadn't closed it immediately behind us because she didn't want me to have to turn around on my bad leg.

Sometimes, Mother, you let me pull through and stand on the end of the lead while you close it. You KNEW I would want to look at the porch, so why didn't we just do that?

After closing the gate, Mother grabs the fly spray and applies it to my neck, legs and torso in the usual fashion. Ahh, thank you. Wait a minute, why are you covering my eye? AHHH!! WHAT IS SPITTING AT MY HEAD!!??!! Mother has never sprayed my head like that before. She has hand-applied fly spray to my head before, but most often just puts strategic SWAT-toos on me. She claims it was because she felt bad seeing all those houseflies around my eyes and that she didn't want the greasy pink stuff on my face and her hands before she groomed me, and she already had the bottle and she did cover my eyes and that really, if I would just be willing to wear the fly mask (the only one out of many she has tried that can actually fit my head) instead of removing it all the time, that whole situation could have been avoided.

Then she got out the dewormer paste and stuck her thumb in my mouth and massaged my tongue until I open my mouth. She looked a little put out, but then stuck the dewormer in and walked away for awhile, presumably to get stuff from the feed/sort of tack room in the barn.

She had dewormed me just a day or two before. She came out to where I was in the run-in and I saw the tube and started to politely decline by backing away. Mother stood in place and I found that I had backed myself up against a wall, with another at my hindquarters. Shoot! Anyway, she walked up and merrily inserted the tube in my mouth and injected the contents. As she removed the syringe, a long string of saliva followed. Mother cursed.

I am not a spitter, but I am a drooler at present, so while Mother optimistically held my head up, she knew that it was inevitable. Eventually, I had to release the saliva from my mouth, and sure enough, a portion of the paste came with it. Mother sighed.

So yesterday she wormed me again, and I suppose the whole rude tongue massage thing was to make sure I didn't have a big bolus of fluid just awaiting. We ended up on the porch so long I did drool later, but there was no wormer in it.

Mother came back out of the barn, and started picking my feet. She gave me a quick brushing... so quick, in fact, that when she was brushing my neck, she suddenly whacked me on my under-jaw with the wood back of the brush. OWW!! She said she was sorry, but really, if she would just take more care, she wouldn't have to say it, would she?

Then she got the farrier tools out.

She started on my feet.

After forever, which is because Mother seemed prone to heat exhaustion and would wander off, panting, and hosing herself down ~ my feet were finished, powdered, shellacked with Keratex, and I was set loose on the lawn to graze. Oh, wait, she stuck another tube of something in my mouth, something to help with my digestion.

Well, I digested that grass just fine, thank you, Mother. I don't think your giant tube of goo was at all necessary.

When she caught me up again after 20 minutes or so, I tried to drink out of the cat water bucket as we passed it. Mother said to wait. We entered the barnyard, and I was trying to drink from the donkey water, but Mother said to please finish my way in and let her close the gate before I drank... something about the donkeys that were loitering right there possibly escaping.

I turned a circle as Mother closed the gate, and at last! water. I drank down a few inches of the donkey bucket, then turned my sights to the big trough right next to it. Apparently the donkeys are too short to reach unless the trough is chock full, but that of course is a rather unnatural angle to drink from. There are two donkey water buckets, but since Callie prefers to drink from them, the humans spend a lot of time refilling them to make sure there is fresh, plentiful water available to the little brats.

Mother made me run about in the Multipurpose to make sure I was comfortable with my new footies, and something about getting more exercise. Whatever.

And she did bring me a cookie or two later. So it wasn't that bad of a day, I suppose.

(The camera is still buried in seaweed. Mother is so lazy.)

Mother's attentions have been sketchy again this week. She stops in when she gets around to it, pets me, then oohs and ahhs over fat donkey walking across the teeter totter...

Mother says there are no pictures available, either, because the bucket of ground seaweed nastiness tipped over in her car and coated the camera case and she is loath to touch it.

Actually, I guess I don't really have anything to complain about.

Except the *stamp* flies.

Hrrmph. Instead of coming up to visit me, Mother is entertaining a visitor at home. Mr. Cruzan, to be precise.

She says that her work is "stressful"... well, being your horse is no walk in the park either, Mother. 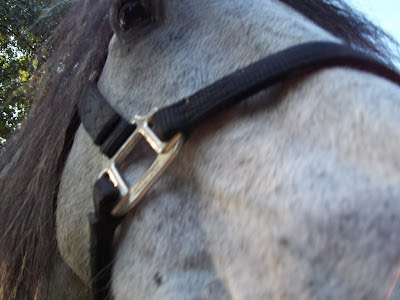 There are swarms of donkeys everywhere you look 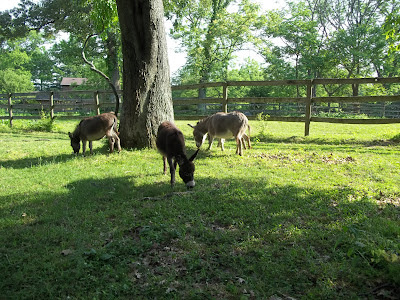 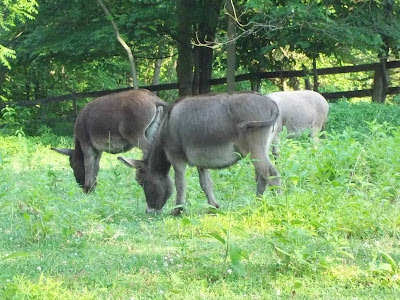 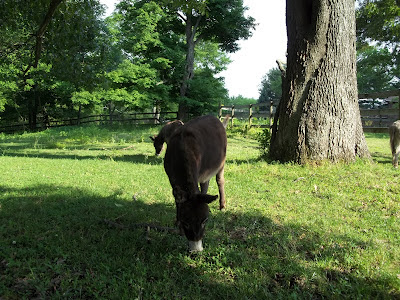 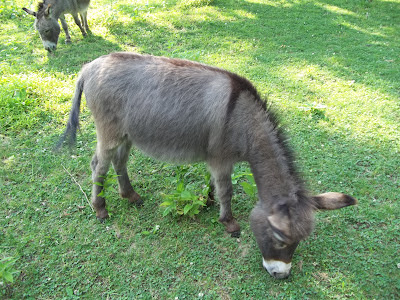 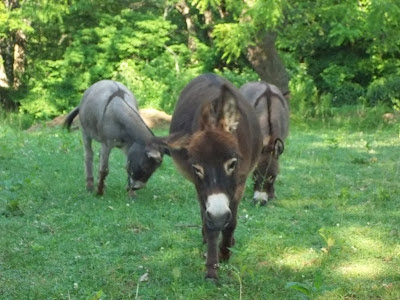 Mother says there are only four of them, but I swear they are everywhere.

Especially in MY hay!!

Since you've taken to a life of despotic alcoholism, I think I might have to adjust my life more to my liking. 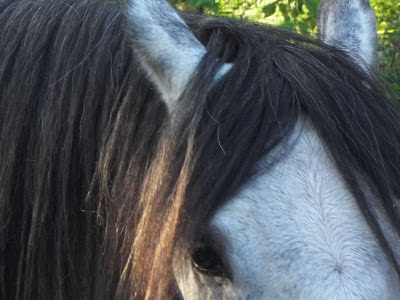 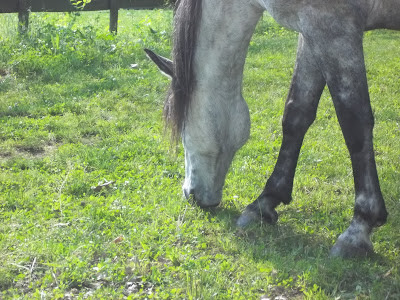 Mother is so fickle.

She has wandered off from the herd again, her sporadic visits once again claimed to be caused by "work". 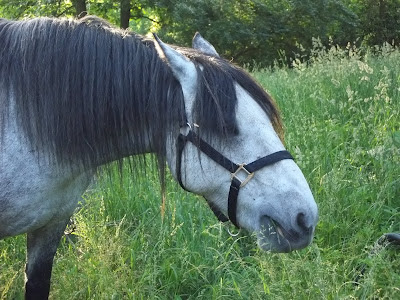