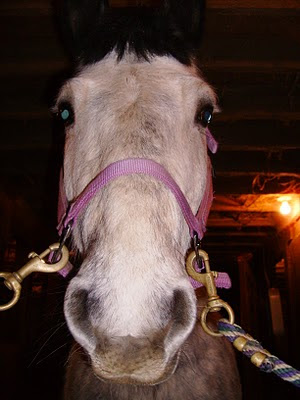 The molt has begun. Sure, thus far it's just a few curries-full here and there, but it has begun. This is one of those times when I really appreciate living in Ohio and having Mother to care for me. I used to have to do all of the hair removal myself, and it doesn't matter how often you roll, it's still there and still itchy.

Yesterday, Mother was poking about, looking at my melanoma, wondering if perhaps that is making me rub my tail. It had been cauterized (along with a few "friends") two summers ago, but this one didn't really reduce like the others. It is just a smidge bigger than a pea, and not open or anything, but it is located mid haunch, right where my legs meet. She's wondering if it feels odd, if it now rubs a bit as I walk around, or if there is some other mysterious cause. As you can tell, her "bathe the tail" plan didn't work.

Mother keeps telling me I need more exercise. This gym kind of looks like fun... I wonder if she would get me a membership?

I know everyone thinks it is easy to be me, but it really isn't. Mother is prone to some strange ideas from time to time, and she says I make an excellent "guinea pig", whatever that is. For example, Mother has always had an interest in good foot care, and has had farriers through the years offer to teach her to trim. She never really did... with Devlin and me, however, she did minor things as she was getting us foot broke and ready for the farrier. The Interloper was her first more serious trim-ee, as he needed to learn to be really quiet about the whole situation, and was particularly sensitive and defensive around new people.

So off and on Mother has taken a few swipes at my hoovies. At times, she laughed that it should at least make me grateful for the farrier and how adept and quick he was.

Since mid-winter, though, with the bad weather and living on Mount Vesuvius here, Mother has been trimming my feet herself. I must admit, I find walking down the gravel driveway hill much easier than I used to. My frogs feel a bit better, too. Mother feels people should be trained before experimenting, but she has a list of reasons why she is allowed around this rule:

1. I'm from North Dakota. For the first six and a half years of my life, I trimmed my own feet. According to her, I did a decent-ish job on the hinds, but my fronts left a little something to be desired. She figures she is probably doing a better job than I did. Hhmmrpph. You try trimming your own hooves when there aren't many rocks or gravel areas in your prairie, and you don't have a rasp or opposable thumbs.

2. In fact, in the first month I was in Ohio, and before I was reliably foot broke enough to risk the cherished farrier, I lost a substantial hunk off one of my fronts. My lamina was clearly visible, as the chunk took off wall at least 2 inches higher than my sole plane. I was a little ouchy on it for a day. Just one. Mother thus reasons I am tough and able to deal if she isn't quite perfect yet.

3. Not much is required of me. I mean, work wise. So as long as I am comfortable, she feels I am a good subject for her experiment.

4. Mother has good perspective, and keeps a very close eye on keeping an even hairline/coronary, my angles, sole and frog condition, and overall balances. She won't hesitate to have the farrier out if she feels she is not helping me correctly.

5. Mother has read and studied different foot care methods for many years, and found one that makes a lot of sense to her. She is also a neurotic sort of human, and tries to thoroughly understand a topic, not just settle for a mediocre grasp of the main points. This does have its disadvantages, trust me. In this instance, though, it is in my favor.

I rather like Mother providing my foot care. I know her and I know her moods. She does my hooves so frequently that the changes don't seem like much and it doesn't take her very long. She also is nice and lets me rest more often, rather than stand with my foot up for what seems like forever, although I imagine I might spend more total time with it in her grasp. In fairness, my current farrier wasn't that bad about keeping my feet up for long periods... and he seemed to know that I don't care for idle chatter when I am being worked on. I hate when they start talking to other humans and stop working but don't give me my foot back, and I must stand there, precarious and vulnerable.

And if they are a loud talker... forget about it!

What is LOVE, anyway?

Mother says she loves me, but she has a funny way of showing it. As I understand, love is gentle, love is kind, love means putting me in front of any other needs Mother may have. So riddle me this:

Mother says for me to enjoy optimal health, I must partake in exercise. Um, OK. The last 3 Sundays we have recommenced my postal route.  I don't mind, but it isn't really necessary... especially because we've been doing it on SUNDAY. There's no mail on Sunday, Mother. Actually, I do mind. It is sometimes really scary out there, and Mother doesn't understand, and she puts me out front and I'll get attacked first and she just doesn't understand, and...

Oh, oh, and yesterday, after our drive, she decided my tail needed washing. Sure, I have been rubbing it... why? I itch somewhere-back-there-ish. My deworming schedule eliminates that as a possible reason. Mother performed a waterless cleaning of my very private area a couple weekends ago, thinking being cleaner would perhaps stop the rubbing. Um, still rubbing. So she decided to wash my tail. Now, sure, it was 50 some degrees... but that water WAS NOT. It was very cold. But because I love Mother, I was well behaved. And I did get an awful lot of cookies later...

I guess Mother still loves me, even though she doesn't visit as often as she used to, and when she does she expects me to do so many not-so-fun things. And she respects me... she has hardly told anyone about the traumatic coat incident from last week, thank goodness. I'd never live it down if that got out.
Posted by Bif at 7:21 PM 2 comments:

Calm, Forward, Straight asked: How does one mess up one's "piloerection"? I'd hate to do it by accident :)


Well, the simple answer is, piloerection is how I make the hairs of my coat stand up away from the skin. Depending on how cold it is, I want more or less air trapped by the hairs next to my flesh. This is how I regulate my temperature.

So, when it is really cold, I look all poofy, because everything is erect. If I am sweaty and hot, all the poof goes away, so I can dissipate body heat and dry off... whence my coat will regain poofiness (precise loft dependent on temperature).

If Mother brushes me when it's really cold, the pressure and static mess up my poofy bubble, and it takes time to get it perfect again. In winter, a lot of times she'll curry me really well, or brush really well, but usually not both.

I hope that answered your question.
Posted by Bif at 6:01 AM 4 comments:

This past week, a glacier descended over us. I and my Red Mare Herd (and my fat donkey and Bert) were "safely" imprisoned inside the barn, lest we find ourselves unable to cope with the ice and injure ourselves. Considering the near spreadeagle and faceplant my fat donkey performed, I understand the humans' concerns and their need to reassure themselves by containing the lessor abled equines, but...

I grew up in North Dakota. NORTH Dakota. Much colder and icier than South Dakota, much less Ohio.

It was a very boring time. I didn't have my window open, because the bracing, refreshing breeze might have chilled the older members of my herd. The doors were battened closed lest the fat donkey wander and fall through a crevice in the glacier. We were allowed to wander the hallway of the barn at times (I, singly), to at least stretch our legs a little bit, but it was so boring.

Mother came up one of the days and filled my hay bags for the rest of my sentence, and distributed Herballs to the inmates.  It was nice to always have hay in there, although the others complained that I made too much noise all night as I ripped, ripped, RIPPED hay out through the teeny tiny small holes of the hay bag.

Jealousy is such an ugly thing.

At long last, the humans felt they had melted enough of the ice that it was safe to lead us to the pasture. Really, the ice was worst in the barn yard and the close areas of the small... the places where we most congregate. I, as leader and sworn protector, was taken out first to test the footing. A good rousing gallop was enjoyed. I'M FROM NORTH DAKOTA!!!! I can handle a little pansy wansy Ohio ice storm.

The humans waited until I had gotten my fidgets out, and then the rest of the herd joined me in moving about. Things have settled back to the regular pattern, and Belle and I are once again out all the time with our run-in. It's nice to be able to groom and chat... the way the barn is set up, I could only see Belle if one of us was on a leg stretching break in the hallway during our imprisonment. The aunts even salted the way to the water trough (presumably so Belle could get to it without injuring herself)... really, is she that delicate?

I may have to rethink my plans of escaping with her and moving back to North Dakota, after all...
Posted by Bif at 6:56 PM 1 comment: