For those curious as to my recovery from the burr avoidance haircut... this was taken on Saturday: 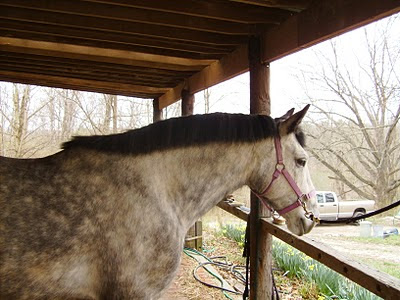 Mother said she is glad she never pulled my mane for the sport horse look... it doesn't really go with my body type.

I still have a long way to go before I look like this again, though... 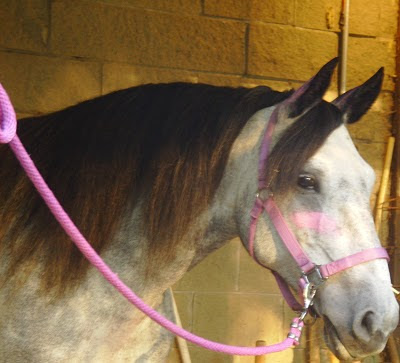 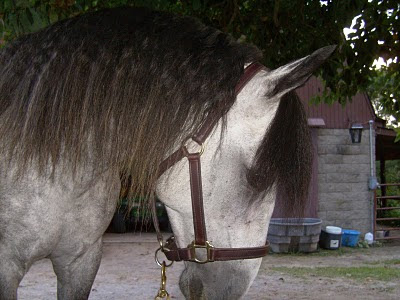 Just in case you thought there had been a gap in my mane... nope, perfect fly protection as nature intended, without the pink! 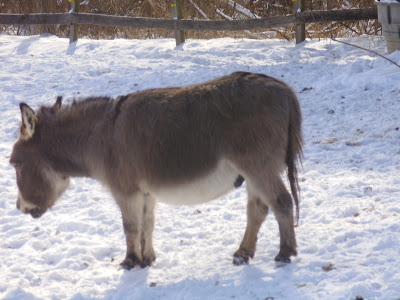 We "got through" a little weather today. With some not so little hail balls. Hail in Ohio is different from hail in North Dakota. In North Dakota, one just humped his back, hunkered down, and dealt with it. You had the freedom to look for a low spot or windbreak, if they were available in your current pasture.

In Ohio, I admit, I do not have to just hunker down and take it. I can stay dry, whether in the barn itself or in the run in shed.  But hail is LOUD in both those places, particularly the steel roofed run in. And as the smallness of the area is magnified by the roar of weather outside, I get a little... claustrophobic?

I think I almost prefer North Dakota hail. Really, if the hail balls could be Hilton Herballs, that would be the best scenario of all! 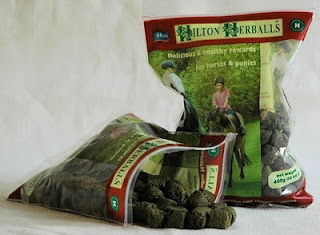 See? Much less scary than hail balls.
Posted by Bif at 5:15 PM No comments:

Mother was up to visit me on Saturday. She worked on my feet, with frequent pauses to sit down and rest. After the last one, she prostrated herself on the chaise. Um, my feet aren't that difficult. She fed me and put me back out with my friends.

Sunday, Mother and Aunt Nancy stopped up and fed me and the rest of the red mare herd some cookies and Herballs. Mother looked decidedly pale that day, too.

I must look into getting a healthier cookie and care human. Her performance of late has been decidedly less than satisfactory.  Where is the best place to find healthy cookie and care humans? Should I have a new prospect vet checked before committing?
Posted by Bif at 5:13 PM 2 comments: 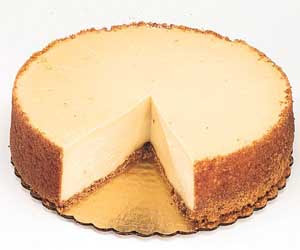 So Mother, in her joy over completing her Calculus exam this evening, celebrated. NOT by coming up to see me, but by spending four hours making a cheesecake.

I don't even eat cheesecake.

Apparently, her work has a tradition where you bring in something for everyone when it is your birthday. Birthday? Mother is giving birth? That would explain why she's been so preoccupied by things other than me. But I haven't noticed that she looks gravid... also, I don't think humans really time those things. She has apparently precisely timed the cheesecake, as she says it needs to age a day, so Tuesday evening was the time to make it.

So once again, I am alone. Motherless. I'm not completely alone... there's Jeanie and Belle and the orangey-red one and Bert and my fat donkey. But for all intents and (COOKIE) purposes... alone.

Maybe she'll come visit me on her birthday! And maybe, she'll save me just a little piece of cheesecake...

Mother, Where Art Thou?

I wish they had a "Follow your Mother to Work" day. I am most curious what she does that is more important than taking care of me. This is not the Mother I met in North Dakota. I want that Mother back. The Mother who taught me that grooming is pleasant, picking up your feet is safe and in fact allows for more comfort. Who taught me how to carry her around, and who would hand graze me and spend time with me and visit me every day.

These days, I hang out with Belle. Some of the others may join us for a while during the day, but mostly, it's me and Belle, and my fat donkey when he is done mooching inside and passes under Alcatraz to come mooch from us. The grass is trying to come up, so that is something to do, I suppose, but... I'm a bit bored 6 days out of seven.

A lot bored. I'm even boring myself writing this.

I'll try again tomorrow. Who knows? Maybe a... a something will... uh, will happen. Something has got to be more interesting than this.
Posted by Bif at 9:33 PM 1 comment: