Mother stopped up oh so briefly last night. She lurched through the snowy mud into the run-in, and looked much larger and blacker than I'd ever seen. I snorted. Belle agreed. Mother was NOT right.

She managed to get close enough to kiss my nose, and I realized it was just Mother, not just some macabre mirage.

There was no cookie forthcoming though, so... maybe a mirage?

I do not understand humans' constant need to change their appearance. In the winter, Mother's outer coat is almost always brown, which is just fine as long as she keeps it on. Or sometimes blue, as seen here with the creepy hay sled from two winters back (remember when she hacked ALL of my mane and forelock off?!?). 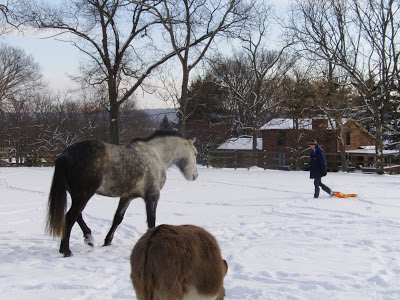 There was an incident with a lighter colored coat that I still haven't recovered from.

So, really, why do the humans need so many outer coverings? I would think three would easily suffice. A super warm coat for the most chilly days (which are still balmy compared to North Dakota), a less warm but still warm coat for the in-between days, and a coat to cut the wind or drizzle on days that are windy or drizzly.

They should all be brown. Or blue. Those are comforting colors.

Oh, no, sometimes Mother appears nearly doubled in girth, and is a strange pinkish-purply color... is she sick? Bloated? 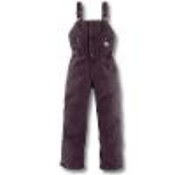 And somehow humans are never happy with their coverings. They either shiver and huddle and say they are not warm enough... why don't they just eat some hay? And give some more to us while they're at it, thank you very much. Or the humans decide that the coat is not needed, and wiggle and change color and leave the remnant that still smells like them in a lump somewhere.

From what I've seen of Mother in the summertime, though, I guess we should be glad that there usually are bundled up in otherness.

The human form is such an oddity in the animal kingdom.

Mother's love is for humans alone,
no cookies today for me.

Please, Mother, arrive
feed me one!
No, more! Like two or three!

Tis the Season to be Jolly... 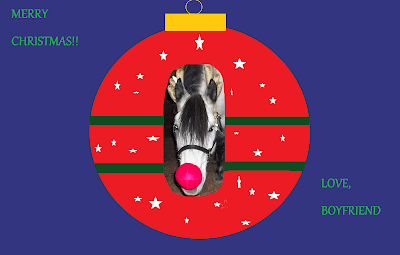 and you've already made a fool of me.
Posted by Bif at 7:38 PM No comments:

Much fuss was made over the wee donkeys and their ability to drag the creepy hay sled around.

I got a few cookies, but not nearly enough.

I'm sure if Aunt Mary had come up, much more fuss would have been made over me. With the holidays and predicted unpleasant weather, it is unlikely I'll get to see much of Mother, and thus cookies.

This is NOT Aunt Mary's fault. This is MOTHER's fault.

So, I am patiently waiting my turn to go to My Happy Place, watching through the Magic Window as horse after horse after horse (who were those strange clothed horses that showed up with Aunt Nancy, anyway?) got to go there first, when at last...

The dentist gave me the good stuff, I was in happy la-la, he hardly had to do any of the brain shaking grinding stuff at all, and I was in the "recovery" stall.

Then I realized what humans meant by not being the first to fall asleep at the party... 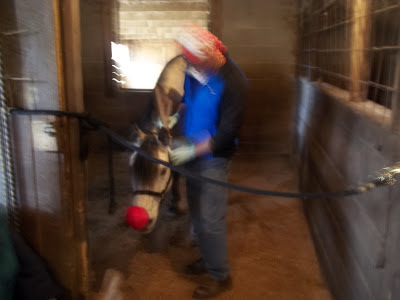 Things were a bit hazy at first, and I reveled in My Happy Place, but as I awoke, I realized there was something amiss. 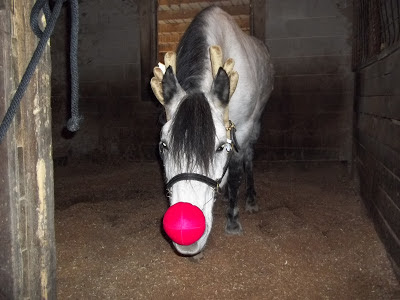 Really? This is fun for you?

And it's not just like they made a small alteration and Mother took a picture. Oh, no! Everyone was giggling. Cameras and cell phones emerged from every pocket.

They made comments about how I might end up on the Internet! 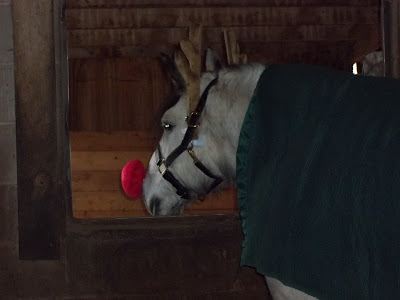 And it wasn't until an antler fell off about 20 minutes in that Mother finally removed my peculiar appendations. 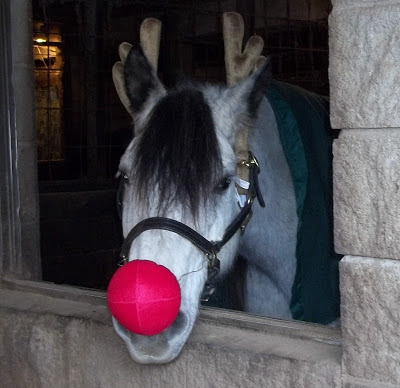 It's ALL Aunt Mary's fault

Aunt Mary was pressuring Mother, saying Bif's Wi-Fi was non-functional and that the world misses me.

Mother said just for that, she was limiting me further.

Actually, I saw quite a lot of Mother this weekend, and I'll be seeming her much of tomorrow, as the dentist is apparently coming.

Mother says she has something "Special" in mind for tomorrow. After things that have happened to Mr. Smothers, I admit to a little apprehension... 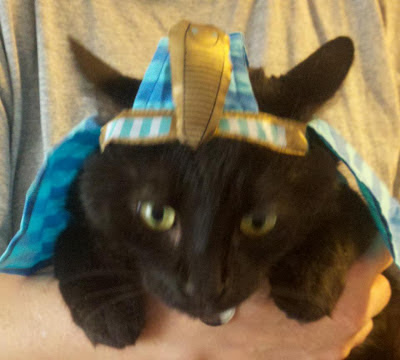 It has been rather dreary the last few days, with lots of rain. Fortunately for the aunts, it is easy to provide Belle and I with our hay by simply tossing it through the magic window. Aunt Marilyn often holds my breakfast for me through one of the magic windows. The magic window(s) allows Belle and I as well as the humans stay dry. Until I have to go get a drink, anyway. 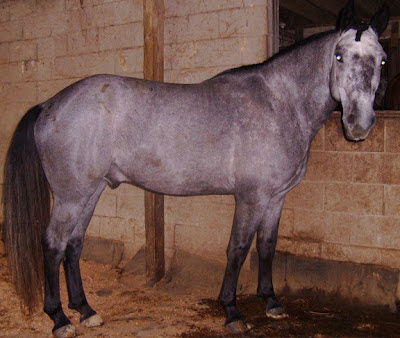 Stock photo of me at the magic window, circa summer 2008. I am NOT that grey anymore

Mother is off ghost sitting. She claims the ghost likes her, I have no idea what she is talking about. I DO know she fussed over Jones and some other big fat horse named Chili (Chestnut Number 3), and really, this is just not acceptable.

She says she'll be up this evening, I heard the aunties talking to her on the little flippy thing, but I'm not holding my breath. 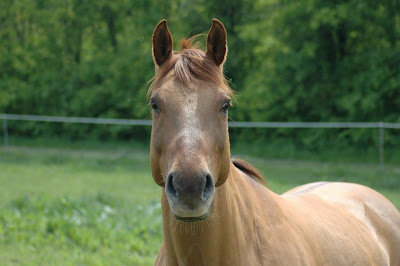 well, I'm not sure I want her to come up here, anyway. 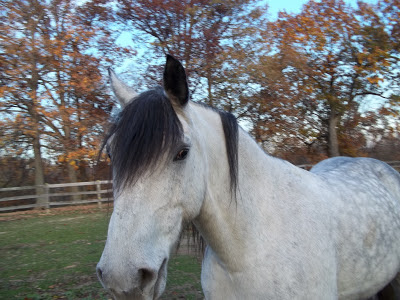 I'm sitting in the run-in this evening, eating my hay, minding my own business, and who should come clumping up in her muck boots, halter and rope in hand, but Mother.

Doesn't matter. She captures me, takes me out to the gate post and ties me, and proceeds to pick and powder my hooves.

She slaps some tummy goop from the syringe into my mouth (we got wormed on Sunday... Yes, it's so GOOD to see you all the time, Mother) and picked up the curry comb.

Really? Really?! There is hay in there! Being eaten by BELLE... and it's MINE!!

I shifted restlessly on the tie. Mother grumbled, untied me, and then tied it even shorter.

I shifted again, she grumbled loudly at me, and I settled in to accept my fate. Really, how am I expected to enjoy a grooming when MY HAY is being eaten. I'm going to get less now! I may have to just chase Belle out for the rest of the evening so I can get something to eat.

And to add insult to injury, instead of bringing me my cookies, Mother fussed over donkeys for ages in one of the stalls.

I know. I watched.

She did finally bring me my cookies ~ four Herballs.

I'm not sure I DO want Mother to visit all the time. Couldn't she come only when I'm not already busy eating?
Posted by Bif at 6:52 PM 2 comments:

Mother came up yesterday. She came out to my run-in, put my halter and lead on, and walked me to the fence gate. She tied me to the large, solid post, and proceeded to curry me vigorously, pick my hooves, and put the powder stuff in my feet.

She found a large crunchiness on my face while currying. She apologized to me as she carefully examined my face, feeling bad that I had had this booboo and she had not been aware. Granted, under my dense face fur it was not visible, but she felt awful for the fact that she hadn't been up here to see it, that she hadn't been giving me a good grooming every day.

She free-lunged me for a bit in the multipurpose, and eyed me critically. She mentioned that she needed to call my chiropractor. I like him, so this was taken in stride.

She led me out to the lawn and let me graze while she pet me along my side and I could HEAR everything she was thinking. She felt bad because she was not up to see me very often. She felt BAD because she was a crappy owner. Just because she was tired all the time and work stressed her was no reason for her to ignore me. She WOULD start coming up more often, even if it was already dark, blah blah blah...

This line of thought was boring, and I focused on finding good grass in the leaf strewn lawn, content to hear her mind just whirl in the background as she pet me along my back and side thoughtfully.

She poked my side a bit more firmly and I jumped away... What the??

"You're getting awfully plump there, Bif."