Something is up, but I am not sure what. That is an unsettling feeling. Humans have been hugging Mother more... last time they did that, she went away for weeks and weeks. But she has been showing me mind pictures of Aunt Marilyn's and my red mare herd. Nothing about Aunt Margie caring for me and my being a good boy like she did when she left for weeks and weeks. So I don't know what is up. 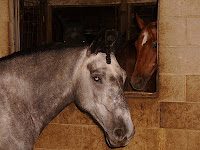 So, I spent the day like I spend most every day, out in the field with my friends, enjoying the grass, the wind in my hair, the mud that feels so good when you roll and squish squish squish in it... 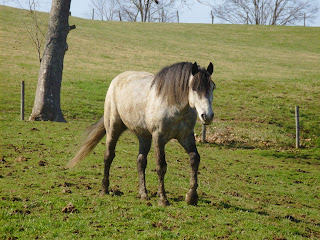 I like living the natural life, and Mother lets me, up to a point. I am the first horse she's ever let have so much hair. 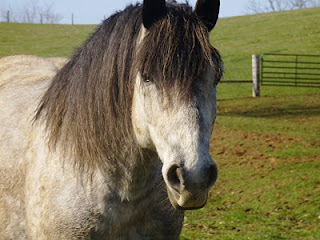 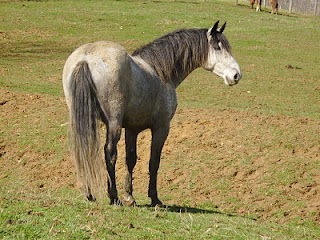 So I wasn't aware that anything unusual was going to happen this evening. I stood patiently while Mother curried and brushed me, although there was a terrible coughing spell by her at one point, and I admit, there seemed to be very low visibility in the barn. She had clipped my halter path and legs and yak jaw the other week, so I peered with little more than mild interest when the clippers were brought out. I hadn't paid any attention to the various comments she had made about my excessively hairy undercarriage, and the fact that she spent more time trying to untangle and de-mud that area.
I've known I apparently am hairier than most domestic horses. I'm from North Dakota! It's important to keep yourself warm. I forgot that Mother really likes to remove hair from my person. Enter clippers.
She told Aunt Mary that she really can't explain to non-horse people what she does on her Friday nights. She wasn't even sure horse people would understand if she said what she did with her Boyfriend. In short though, she gave me a Bolivian. Or a Peruvian. A Venezuelan? Something like that.
There are no pictures for this part of the story.
It was a little disconcerting. She clipped off all the long guard hairs from between my back legs and other portions of my undercarriage. Something about hair shouldn't be that long, and it was too easily matted with mud. I stood patiently while she stuck her head and clippers in all sorts of areas I don't think she's really examined that closely before. It was fine. Until I moved.
There were hairs that were tickling me. I spraddled in back, so Mother could get those tickly hairs off of me. Mother laughed that this would make a really great picture, as all of the South American was clearly visible, but fortunately Aunt Mary talked her out of it.
I have my dignity to maintain.
Posted by Bif at 11:07 PM No comments:

Sometimes, in Mother's intermittent and somewhat inept attempts to purify my outer person, she uses "hoses". I think of them as snakes, but I've heard Mother call it a hose, so I guess that's what it is.

There is the blue snake, I mean hose, which spits water. I don't really care for it, especially since the water it spits always seems to be awfully chilly. But I've learned to tolerate it, as it doesn't bite me, and eventually I'll get my dinner.

Sometimes the hose is white, or red, or green. Those colors all spit water.

Tonight, Mother used the other hose, that I almost had forgotten. It is a black hose, and it spits air. A LOT of air. Really hard, and it makes what looks like smoke rise up out of my hair, and the hair and debris on the ground skitters in all directions if the hose points that way. It wasn't as bad as I remember from the first time; the air wasn't nearly as cold. But it is really creepy nonetheless.

I started thinking about this, and maybe I shouldn't complain that these things always seem to involve cold... because, what if Mother gets a fire hose?!? What if Mother decides to clean me by burning off the dirt? She already uses water and air, which I would never have thought of. I use the ground, or trees or something.

And if she has a fire hose, how would she burn off the dirt without burning ME? I try really hard to do what Mother asks, but if she comes near me with a fire snake, I'm out of there. Cookies just aren't worth that!
Posted by Bif at 8:50 PM 1 comment:

I drive really slow on the driveway

So, there I was, out in the field with my friends, newish grass coming up, minding my own. 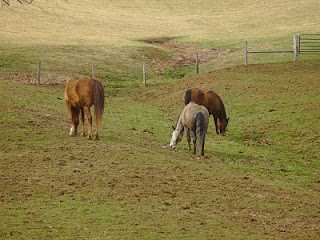 Stuffing my face as best I could, if truth be told. Oh, and see, I am not too fat. Please tell Mother I look fine, perhaps even thin. 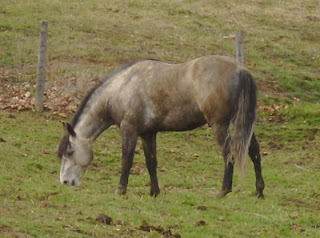 From time to time, Mother feels I should do some work, earn my keep, that sort of thing. Hello! The grass just got here. But, I am a good horse, so I went along with Operation Ground Driving Photo Op.


Actually, she worked first with the Big Ruby. 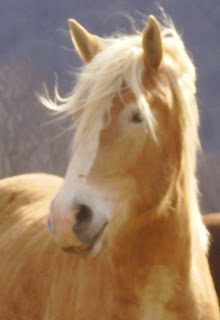 I don't see what the Big Deal is. I am way more important than her, but Mother rides her, not me. Sigh.
Anyway, Mother trussed me up, and away we went. I think she was just excited that she had talked someone into taking pictures. Never mind that daylight was waning and most of the pictures look like we're driving in the dark. She does that to me all the time, so it's not really falsification or anything.
Plod plod plod. All we do is walk. 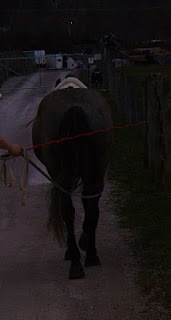 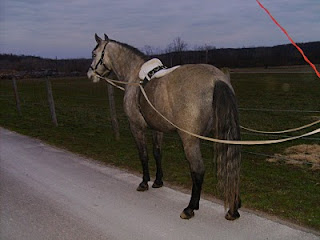 And walk around with purposelessness. 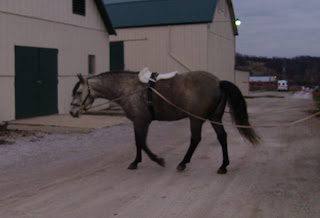 Don't think I don't recognize purposelessness when I see it! 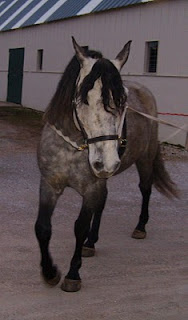 So we wandered around, down the drive, through some mud, and in the lower parking lot...  fortunately, I have my night vision eyeballs in. 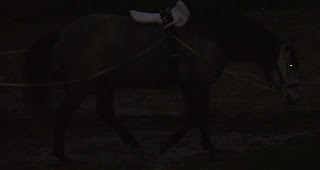 More purposelessness? Aw, come on! it's dark, and I want my dinner! 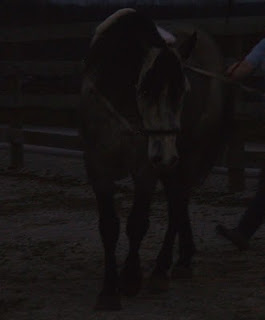 This is so boring, and I can almost taste the Mrs. Pastures cookies waiting for me... 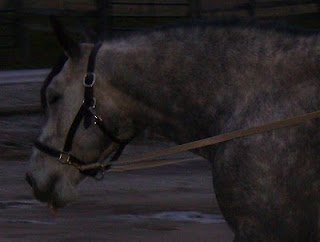 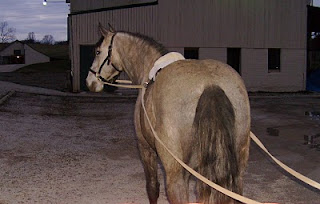 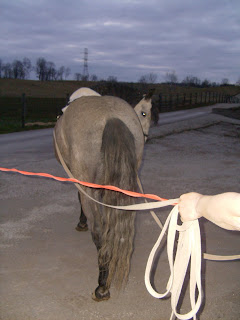 Just when I think we're done... not. She likes to take pictures of me. She says I look like Andy Lucy  somebody... 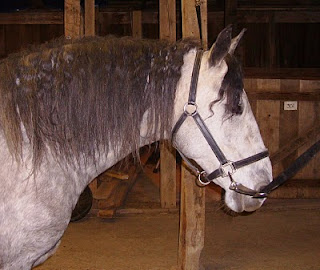 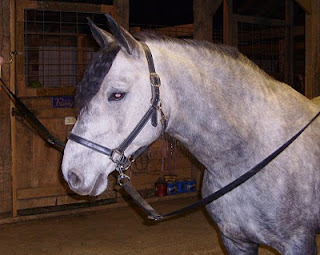 And this has taken forever. I want FOOD!! 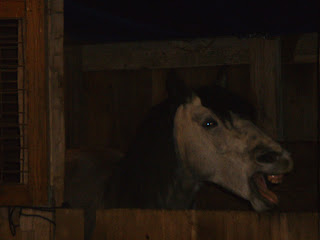 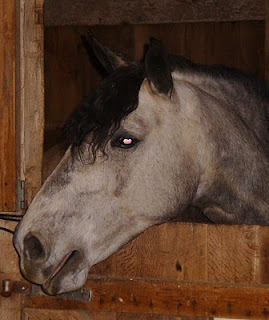 
See what happens when you do not thoroughly wash the coffee container before using it for feed set-ups? This sort of thing happens everyday, in barns all across America...
Posted by Bif at 10:15 PM 2 comments:

Could some one please air-drop me some food? Please? Food has become so scarce, I've scarcely had the energy to write anything!

Mother has been messing with my food supply. She thinks I am "hefty", and tells me it would be easier on my leg if I had less weight on it. Well, d'uh, that's why I rest it more, silly Mother.

Which means I haven't really been eating my supplements. Maybe those help my leg, after all... hmmm... Mother will give in soon, though, and give me my real grain again. I'll just keep holding out...

In addition to the crappy grain, with supplements I don't really like anyway,  Mother has been messing with my hay supply. She's been giving me the first cutting stuff more, and sometimes doesn't even give me any of the good green stuff. Or, she puts the good stuff in a hay net with really small holes. It took me a while to figure that out. I thought it was some sort of cruel torture, but if I wriggle my lips and YANK I can get the hay out. It's a lot of work, though. There's good hay in the field all day, so I make sure to eat lots and lots of that.

I have been having fun, otherwise. The sun's been shining, Mother ground drove me today. There was some snide comment about not being sure if she could get the belly band all the way around me. When we started out, past the front of the barn and the manure pit, there was a snow melt stream in the parking lot that usually isn't there... I really didn't want to cross it. Mother didn't let me turn away, so finally I braved the stream. It was really shallow, after all. No sooner did I cross it than I noticed the FIRE! I saw a little, smoldering fire, and leapt to the side, away from it. Mother snorted at me and said, "You sidepassed toward it not wanting to cross a little water, and NOW you see it?!?" Then she laughed at me.

Other news... hmm. She washed and re-braided my tail yesterday. The water was a little chilly, but she does a good job of not getting the water on my body, just on my tail, so I didn't really mind. I like when she fusses on me, so if I have to put up with some of the weirder things from time to time, that's OK. She did deworm me today. Blech. She likes that I never try to spit it out. I usually don't even make faces. She gave me a candy cane a few minutes later. It wasn't long enough later. It's a sad thing when even a candy cane tastes blech-y.

Oh, and of course I got my cookies tonight, even though I didn't eat my supper. So I guess it is unfair of  me to say there's a famine... But is all the grain and alfalfa hay I can eat really too much to ask?
Posted by Bif at 8:44 PM 2 comments: