It may have gone well. Apparently, Aunt Nancy is looking for something red and racy and foreign, instead of something solid and stolid like me.

Mother reassures me she isn't looking at all... even if there was a pretty grey mare that caught her eye.

I'm all for her bringing home more mares. It's not like I can go out there and get them myself to increase my herd...
Posted by Bif at 6:38 PM No comments:

So, yesterday had something kind of weird in it. Mother found me in the field and, saddened by my ice beard, brought me in and brushed me, clipping my fore-beard and my bridle path while the donkeys oggled me, then picked my feet and set me free.

She proceeded to capture the donkeys in turn, but when one re-emerged, it looked sort of like this


It was like the Fat Donkey Incident all over again! 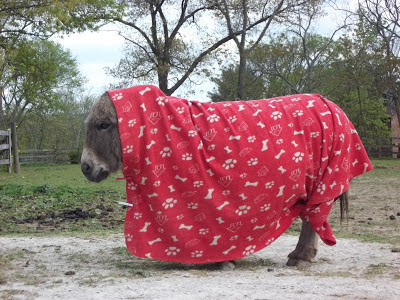 I snorted and trotted about. The Badgers snorted and fussed. Julia, afraid of us horses unless there is hay involved, was at a loss as to how to deal with our strange behavior.

Belle stared at all of us like we were idiots.

Last weekend, Mother did come up and see me the one day... but the other day she went off cavorting.

She and several aunties went to the home of a fellow equine connoisseur. I used to think "friend", but that was before I realized she was the agent of donkey evil and that is why there are so many of them around.

Anyway, the humans were having a good time, laughing and eating and whatever else they do when they are not at the barn with us, and Mother was so hungry that she broke her tooth.

Afterward, she looked a little odd.

Apparently her fellow humans have cautioned her to only use plastic eating implements from now on. Fortunately for her, she went to her version of Uncle Jeff, and she is now theoretically good as new.

If one looks really closely, you might see the tooth does not have the same perfect proportions it had before "the incident". But you had to have known Mother before the incident, too.

Oh, and today is some special human holiday, so Mother stopped up and gave me a couple of my good Mrs. Pastures cookies, but only after stomping around awhile and inserting lights into the ground (how do they do that?).

The path to the house, as well as the path from the barn porch to my water trough now have some vague luminescence.
In a rather haphazard fashion.

Perhaps the aunties will come along in the morning and bring some order to Mother's late evening wanderings.

A Cold Winter's Night (WITH GRASS!!)

Mother and Auntie Erin came up up the other evening. I was in a snit, because the very first thing they did was catch some donkeys and take them for a walk.

I was not pleased.

Mother and Auntie then proceeded to groom each donkey. I peered in from the run in.

Finally, Mother brought ME in and I got curried and brushed and picked and powdered. She asked Aunt Erin to graze me on the lawn.

I followed her to the front barnyard gate, but there was no porch light on. Mother walked through, and though I could not see after the brightness of the barnyard light, I accompanied them. Then Aunt Erin stepped off the porch and the ground crunched and it was whitish and dark and I froze.

They encouraged me, and I stepped out onto the icy driveway and to the waiting grass beyond. 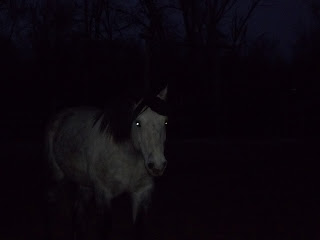 The next day, Mother brought up new lights for the porch.
Posted by Bif at 5:02 PM No comments:

I love snow. I find it is ever so much more comfortable for my joints. Like walking in the clouds...

Too, it brings back fond memories of my youth, in North Dakota... but it's an awful lot warmer here!

That also reminds me just how much better it is here than if I still lived up North. I get grain here, and I only have to share the hay pile with one horse (and a donkey or four), rather than the dozens upon dozens of my cousins and brothers.


And if Mother moans about the cold (pansy) or how difficult it is to slog up to the barn (this isn't really snow, Mother! There's only 3 or 4 inches) or forgets to bring the camera to show off my cavorting, well... 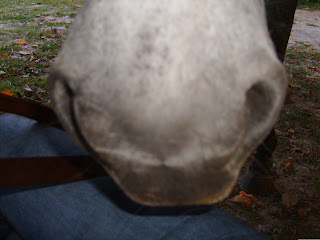 Summer's just around the corner!