After her long hiatus, Mother apparently felt overdue in her attentions towards me. She appeared this afternoon, and let me out to eat on the lawn awhile.

She brushed me. She picked my hooves. All is well.

She got out the clippers. I could tell from their whining drone that they weren't terribly sharp. This means it will take Mother forever and sometimes the blades will tug. I have a lot of hair, after all.

Mother trimmed my bridle path. She ran down the outside of my ears. She undid the snap under my jowls, and started "clipping".

There are now horrible ragged tufts all along my underside of my face. At times, Mother was holding clumps of hair and trying to run the clippers through them.

She quit after that. I was relieved, yet a little hoping she was at least planning to even the butchery out. sigh.

She claims she has fresh blades at home and that she will switch these out soon. I don't think the fact that I wear through clipper blades in just two or three head/jowl/leg sessions that that is any excuse for Mother not to have sharp ones on hand EVERY time.

But I did get to go back out on the grass a bit longer, and I got cookies and everything, so it was still a pretty good day.
Posted by Bif at 11:30 PM 2 comments:

So I was in the run-in tonight, minding my own business and waiting for Aunt Marilyn to come up with hay, when I hear a voice calling my name. I peer out into the darkness... it sounds like Mother, but I don't... see...

The voice is coming from the fence line of the neighbors. Hmmm, Mother sometimes comes up that way. I see a blob of light colored motion. What the heck is that??

I walked out of the run in, and the blob made a funny sighing noise and slipped through the fence and started coming closer. I stood scenting, staring, trying to decide what this was. It sort of sounded like Mother, but also made some whining noises and odd crinkling sounds. And it bobbed in a strange fashion. It came very close.

It was a Mother-apparition; I mean it sounded like Mother, but she was so light, and I've never heard her crinkle like that. It extended an arm towards me, Herball in hand.

I snorted and backed away.

"It's only me, Boyfriend. I know I look different, you just haven't seen this coat before. It's what is crinkling."

It took another step, arm still stretched out. Uh, I can eat the Herball if I s-t-r-e-t-c-h. Crunch crunch. It walked closer and fed me a few more, but the crinkling continued and I wouldn't let it touch me.

Belle walked up, and the Mother-apparition fed her one of MY Herballs and scratched her under the jaw. Maybe it is actually Mother? Belle doesn't seem alarmed by the crinkling. Of course, she wasn't worried about the rattlesnake, either.

I let the Mother-apparition touch me, a bit, but the crinkling really was too much. I followed alongside as it walked across the Small. I realized the odd bobbing I saw and strange whining was actually Mother trying not to get her shoes muddy.

I guess it was really her all along. While it was nice of her to bring me cookies, it would be nicer if she was less creepy when she did it.
Posted by Bif at 10:09 PM 2 comments:

One thing I will say for Mother, her list of excuses why she doesn't come to see me EVERY DAY is limitless. Just when I think, "Surely she will come visit me soon", she has some other reason she didn't come up.

"My car got smushed."

"They are going to stop Papa's heart, remove and refurbish, replace and restart."

Mother, your excuses are wearing. Please just come visit soon! I've even taken to nickering at the aunts...
Posted by Bif at 8:29 PM 2 comments: 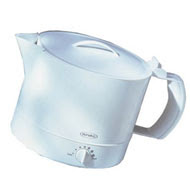 Mother provides me with hot meals. The Aunts do, too, but they usually just bring water up from the house, already warm for cooking.

I used to really dislike the kettle. Mother used it to warm water for face cleaning in that first winter (and spring and summer) while battling the hole.

The worst thing about the kettle, though, is that it screams and hisses most oddly. It doesn't start out doing that... so I stare at it suspiciously until it does. Then I let Mother know it bothers me.

Mother has learned to prepare the kettle when I am not around. And since it makes my dinner all perfectly cooked and yummy, I guess I don't mind it as much.

The End of the Internet

With Mother's neglect of me, the only good thing is that it gives me time to look around at the world. But I have a lot of free time... tonight, I found The End of The Internet.

You'll never guess what was there... 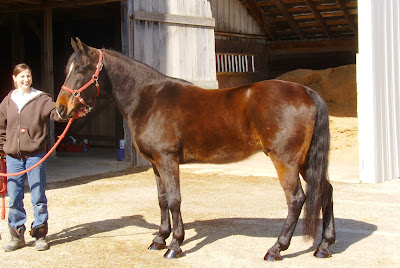 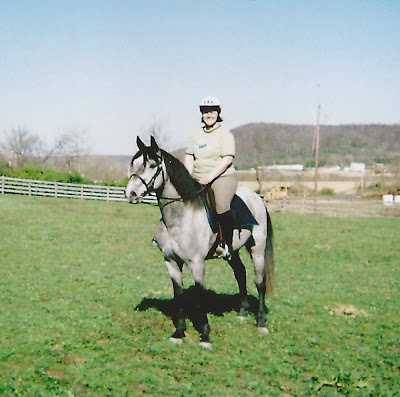 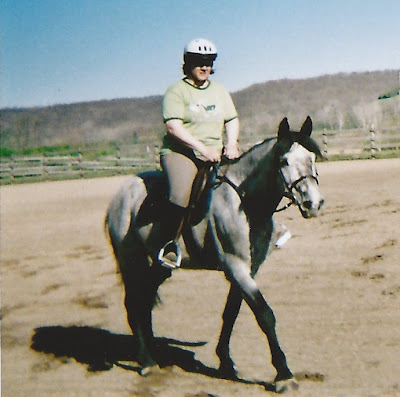 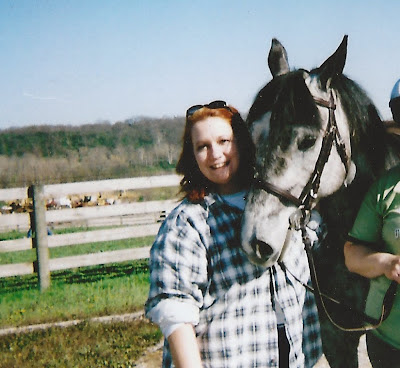 Mother has done lost her mind. She goes around humming and singing some song about my buddy, Iota McHippus. Fenway from Brays of Our Lives introduced us, and ever since Mother has been singing this:


I don't mind, though, because Iota is a pony with a plan. He is trying to be the coolest horse - well, at least voted the coolest horse. Mother tells me all the time I am the most wonderful horse in the whole world, but I didn't enter the competition.

Anyway, Iota is trying to win so he can give money to charity. So if you are prepared for a giggle, you really should meet Mr. McHippus.
Posted by Bif at 7:35 PM 3 comments:

No rest for the weary

Mother came up this afternoon while I was lounging. 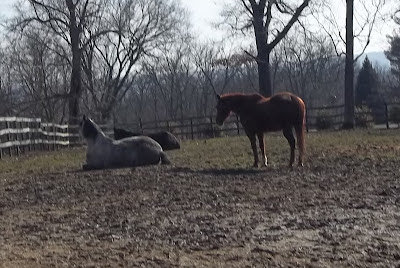 Great. You made me get up! 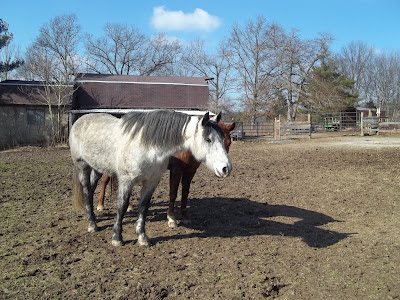 Not really. I didn't get up. 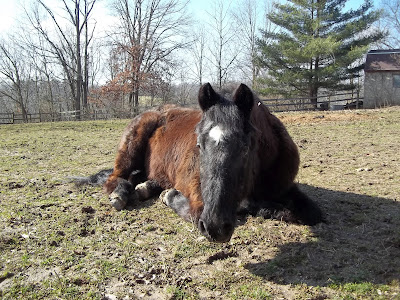 I'm glad you're here. Do you have
any cookies?? 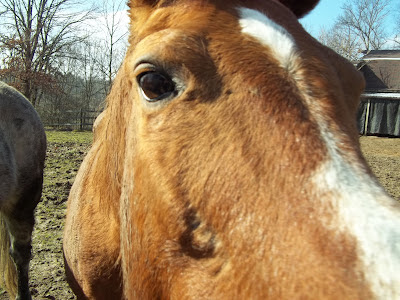 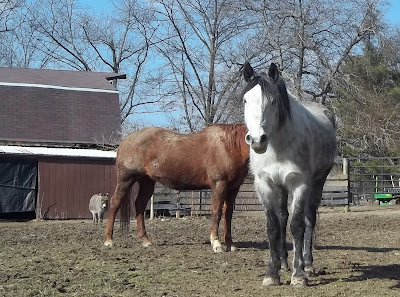 I was munching on some pre-diner hay the other day, minding my own business. All by myself, in fact, on the feeding mat in the barnyard while the rest of the herd loitered in the Small and stared at me. Mother stood off to one side, admiring me I suppose. My peace is broken by the appearance of a staggering donkey and Mother's concerned inquiry, "Donkey?! Are you OK???"

I look over to see my fat donkey lurching past Mother then twitching and staggering backwards and sideways... Whaaaat the heck....???

Donkey continued in his bizarre fashion towards me and the mat, until one staggering step away he swung round, pinned his ears, and snatched a chunk of my hay. He trotted away quickly.

Mother burst out laughing. I figured I shouldn't let him get away with such insubordination, but I was feeling lazy and I still had plenty of hay.

Besides, that was quite the interesting show.

Mother secretly hopes to recreate the circumstance and catch it all on film.
Posted by Bif at 11:12 PM 1 comment:

So, there have been some developments on the dinner front.

So, this is really all I could have hoped for. In the past, some of her supplemental choices have been less than palatable... blech!
Posted by Bif at 7:52 PM No comments: