Bad Sitcoms and the Zombie Apocalypse

As often, Mother has been too lazy to love me and take pictures and all the rest. Like a bad sitcom, she thinks it's OK just to put a re-run up.

I will say, though, she really, really likes this post... and it is keeping with the day! 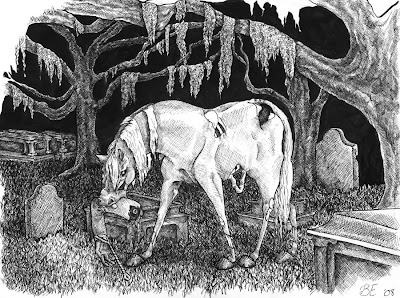 found via google images on deviantart.
BE, thanks for drawing this in '08

Mother is an infrequent reader of other things on the internet. Without wi-fi of her own, her attempts to glean information and entertainment (AND COOKIES!!!) are much more limited than in the past.
One blog that is read is about some horses named O and Ima and Pangea.[and now Tre] Apparently they remind Mother of a previous life, or something.

ANYWAY, the lady that writes about O and Ima and Pangea had some questions for her readers, which Mother decided should be answered here. After explaining to me exactly what is involved with zombies and their lifestyles (oh, ick ick ICK), here goes:

You have to choose only 5 things to survive the zombie apocalypse. What do you bring along?
Hay bag filled with hay (NOT the slow feed ones... oh, wait, that'll keep the hay from spilling out everywhere), Mrs. Pastures Cookies, Herballs, my joint supplements, and Mother
Quick! There are zombies chasing you and your best friend is slowing you down. Do you trip them up and let them get eaten, or help them along at the risk of being eaten yourself?
No. I can't make make life or un-death decisions like that. That's why we move in herds, and why the miniature donks aren't too awful to have around. The wolves, er, uh, zombies will definitely catch them first. Then Callie, then Bert. Belle will be tired by then... I'll still be going strong!

You get to the barn and find that your horse is a zombie! What do you do?
Oh, like Belle was a zombie? Does she still eat hay? If not, more for me!

If you were a zombie, who would you eat first?
Fat donkey. Then I wouldn't have to eat again for a while.

Do you think zombies have feelings and can they be cured?
Everyone has feelings. But can feelings be cured? I don't know. A better thing is if the feelings never need to be cured.

In this world of Smartphones and technology, do you ever wonder if we're ALREADY all zombies?
Can zombies eat hay? No.
I eat hay. Therefore, not a zombie.

You found the cure for zombification! What is it?
Being a zombie IS the cure. If you are a zombie, you don't mind being a zombie... Do you, Mother?

You have a choice for vehicles to survive a zombie apocalypse: a heavily armored but slow tank, a very speedy jacked up truck with a gun rack, or a small cargo carrier airplane. Which do you choose and why?
The tank, because I am afraid of heights.

Where is your safe hiding spot going to be during the zombie apocalypse?
The run-in shed.

The zombies have caught you and you're about to be eaten. Which part would you want them to consume first?
Mane and tail. That should keep them busy for quite a while, plus they might choke and give up. Oh, and then my hooves, if they are just trimming up any rough edges.

You're up for some hand to hand combat with zombies. You have a choice between a baseball bat, a Swiss army knife, and a meat tenderizer hammer. Which do you choose?
Hooves. I can't hold any of those other weapons very effectively.

If zombies could dance, what kind of dance would they do?
Mother told me to write "The Monster Mash". I would think a mash made of monsters would be rather gross and not edible, however.
Posted by Bif at 2:26 PM 2 comments:

Mother said I should reassure everyone that I am not dead. 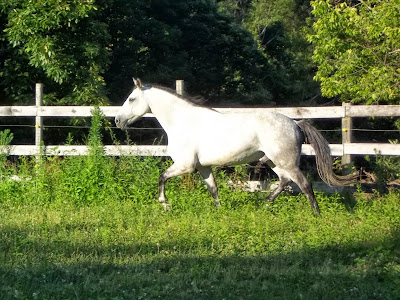 
I could say I've just been busy eating, and getting burrs in my hair, and getting shaved bald again like the last time... but really, it's because Mother has no internet and thus I have no way to communicate with the outside world. I'm really not that busy.

I do have a visit with the dentist coming up soon, so I am excited about that... HAPPY PLACE! And apparently Aunt Nancy will bring her Bunny over, who I've never met. I hope the donkeys scare him to death, but Mother says he lived with a donkey, so the likelihood of that is quite slim.


Mother has also been drooling over some horse on the internet, but I am not worried.

If she can't afford Internet, how could she afford another horse? 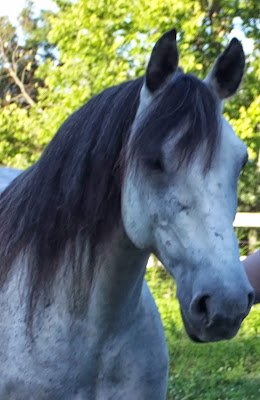 [when I still had my hair]