She should have been feeding me a special holiday dinner, like last year. But after a hasty dinner of normal rations, she put me in the cross ties and brought the contraption around from the barn porch. She reminded me that the holiday is not just about cookies and how much grain I get... perhaps not, but I don't think it's supposed to be about work, either! She picked my feet, brushed me off, and put my pad and surcingle on. The whole time she was making our dinners and getting my various accouterments ready, she was singing about a "one horse open sleigh" and some sort of bells.

I have to admit, this was making me a little nervous. Sleigh? I'm "one horse"... what's a sleigh? Mother just hooked up my normal pole contraption, though, and we journeyed out of the warmth and light of the barn and into the snowy dark pasture.

I've never before gone for a night drive in the snow, but it wasn't too bad because all the snow made it pretty bright out. I have no idea what got into her. I should have been eating my hay, like all the others were, not out dragging the contraption to nowhere.

Mother did give me a lot of cookies before we drove and after, and there were cookies in my dinner, and of course my goodbye kiss cookies (Hilton Herballs... yumm!!).

And finally, I was put back out to eat hay with my mare, Belle. But then Mother came out with the flashy picture taker... if you're coming out and disturbing my already late dinner, you better have cookies, lady! 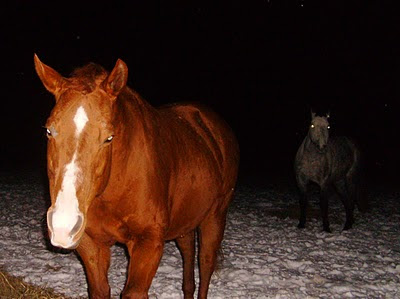 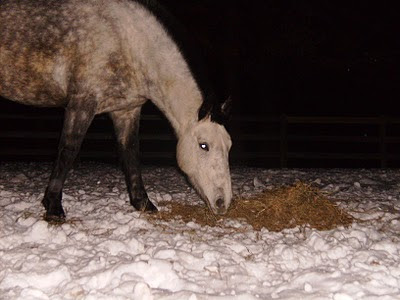 We have a perfectly good run-in shed... we could have had our hay in there, instead of dining al fresco.

You know, though, I have a full belly and more hay for later and friends and a warm place to get out of wind and weather and good healthcare and Mother came to visit, even if it was a little strange to work in the dark, and I really should just stop complaining, I guess.

Hair Club for Men: an Update 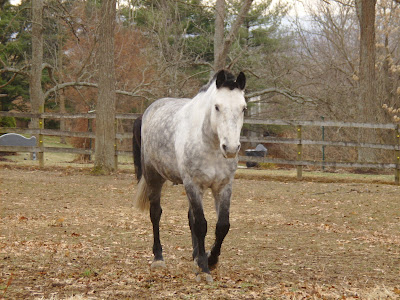 My hair is slowly returning... Mother took some pictures last weekend, and wanted to show my regrowth progress. 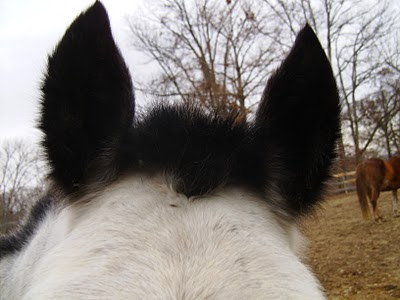 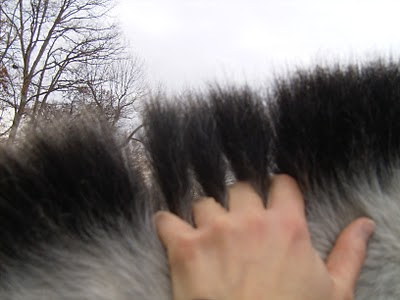 Of course, that would not be necessary if she hadn't hacked all of it off. I like to stick a burr or two in there, partly for old times' sake, and partly to show her that her efforts didn't really work.
I realize, especially as a grey horse, that nothing stays the same. I am not as dark as in years past... in fact, I am lightening to a frightening degree. Mother tells me this is regular grey pattern lightening, and there is no cause for alarm. 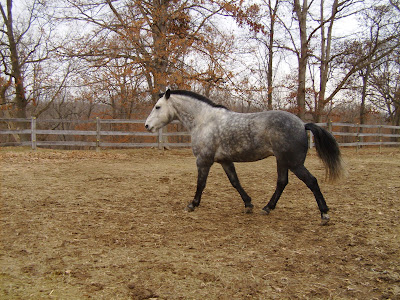 I still think the next time the hair club for men ad pops up, I'm clicking.
Posted by Bif at 8:27 PM 2 comments: 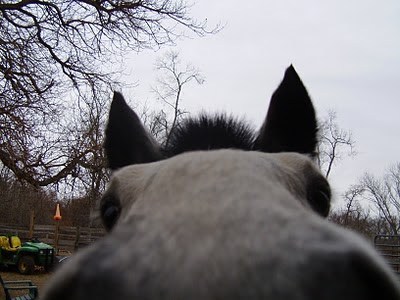 Mother told me I was to write you a list of what I wanted for Christmas.

1. More cookies. Since Mother isn't at the barn every day like she should be, it would probably be best to just put an automatic cookie dispenser in my pasture. I'd like one for my Mrs. Pastures, and one for the Withers & Withers cookies, and one for Hilton Herballs.

2. Potato chips. Mother gave me some one day, and they were perfectly salty and delicious. She says I really shouldn't eat them, but what she doesn't know won't hurt me. More, please.

4. A new halter that is black and fits my winter head. I would also like you to take the "raspberry purple" halter with you when you go.

5. Grass... I know this is difficult in winter, but if you can deliver presents to hundreds of thousands of horses in one night, you can probably handle a little grass out of season for one little Nokota.

6. Perhaps a little visit from the vet and some sedation. The vet was here the other day, but no sedation, sadly.

Most important of all, Santa... I would like Mother to start coming to the barn every day again. I know you are really just into material goods, but I would forgo all those other things (well, except the cookies, obviously) if Mother would just come back and spend time with me like she used to.

Mother sometimes has a fifth appendage, the lunge whip. She has two different ones, the red one I've always known, and a creepy black one that's not quite the same. I've see her with other appendages, which she uses around other horses, but she pretty much only uses the red appendage for me.

She can make the whip make sharp sounds, and this reminds me to move along again... like when she would let me gallop loose in the large arena at the old barn on snowy nights, because I needed "more exercise". That's winter fur, not fat, lady. If I stopped for too long, that sharp sound would remind me to keep moving.

When she lunges me, I keep an eye on the whip as well as listening to Mother's voice, to know how quickly I should be moving. She seldom has it make sharp sounds when she lunges me.

When she ground drives me, she wraps the noodly part of the appendage around the stick part and will use it to touch me on my sides or rump to indicate motion or direction changes (or, sometimes, just a touch to remind me she's back there and she made a request... I get distracted way up there all by myself, and forget she's back there). This is where she sometimes uses the creepy black whip instead. She also has black lines to drive me with. She says they look nicer than my dirty, dingy white lines. I don't like them though. I like my red whip and white lines.

Sometimes when she props the whip up against the wall, it leaps to the ground. I don't let this bother me, because as it's Mother's appendage, it won't hurt me. I know some horses who are afraid of whip appendages, because they say they hurt. I will admit I've watched wide-eyed as Mother has wielded her appendage at others with more force than I think she uses with me, but it's never hurt me.

The other day, we walked into the barn after driving. I was turning around in the hall, when the appendage brushed my front legs. WHAT!?! I froze... peered, snorted.... why would this touch my legs? I need my legs! It's never touched my legs. Mother apologized and said she didn't make it do that, the hall is tight and it just happened, the same way it sometimes just falls from the wall.

While it didn't hurt me... uggg, that was just creepy. No wonder some horses don't like these things...
Posted by Bif at 6:17 AM 1 comment: