When I first met Mother in North Dakota, she wandered among the bachelor band, meeting my cousins. After awhile, she and one of the hay men leaned against a big square bale, and discussed the various horses as they came up to them. Mother wondered about their families and temperaments, which ones had been halter broken, which ones had been gelded already.

I understood family, but halter breaking and gelding were unknown concepts. What could she mean? When I at last braved going up to near her, as so many of the others had and they seemed happy to do so, she pet me and I thought, "Wow, humans are good for something besides hay!" Frankly, I found humans more than a little scary for a long time. They smell so predatory, and they walk oddly, and they stare at you as if you're chicken and they want to eat you. No horse stares at you like that.

Anyway, Mother noticed the hole in my head. The hay man wasn't sure which family I belonged to, but said they could figure me out from the foal papers. She visited with me that day again with the young hay man, and again the next morning with a third hay man, all trying to figure out exactly who I was. Mother knew, though. She had already called me "Boyfriend" once or twice, trying to get my attention. Hey, that's me!

Time passed, moons waxed and waned, and I figured Mother was just a figment of my imagination. I didn't really want humans to touch me, although I am glad they brought hay. Only did I later learn that there were discussions about me that would dramatically affect my life. My identity was determined. I am the son of Target* (I could have told them that, if only they'd asked). OK, technically "a" son of Target... my brother Nahockey is a more famous Target son, since he is the Breyer model Nokota, but I am MUCH more handsome.


Just look at my excellent conformation! 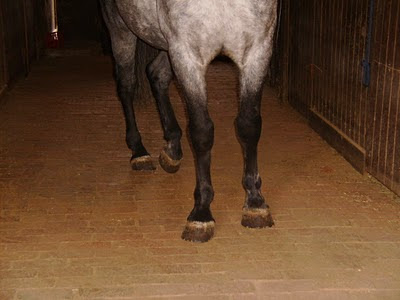 That is not the picture I wanted Mother to use...

Mother came out to visit again in November, and she was as nice as I remembered. Mother worried about the hole in my face, and hoped to get it fixed. She asked if after my face was fixed she should leave me "intact" and donate me to the Conservancy, if they needed another Target stallion. They said they had enough of his line, so Mother was ready to have me prepared to ship to Ohio. After six years of life on broad North Dakota prairies, I was to become... domesticated.

The young hay man introduced me to halter, and rope. I learned to follow the human that held the rope. I learned to follow the hay man even into the moving stall (later, I found out this is called a trailer).  I learned that petting me was their way of being nice, and while it felt different than when Mother pet me, it was not unpleasant. A week or two later, the hay man loaded me and the Devlin Pony and Swirly Roan into the trailer, and we went on an "adventure".

We went to a strange building, with many strange, sharp smells. The other two left - one at a time- and then I went in. A stranger gave me a poke in the neck and I felt woozy and odd, and I collapsed. Speaking now as a horse of experience, this is not a big deal... humans do the big knock out whenever they plan to do something really invasive, like stick your head into a big radiation machine or cut a hole in your skull and dig around, or fill your leg with salt water and cameras and scalpels and scrape scrape scrape. At the time, though, I had never experienced anything like it, and I was mortified... How could I avoid predators, if I was just a little heap of Bif?

The young hay man put a piece of clothing over my eyes, and I could see nothing. I lay still as the stranger removed portions of my anatomy that had nothing wrong with them. When he finished, the hay man removed the shirt from my face, and I immediately surged to my feet. There was some startlement on their parts... I guess horses usually don't just leap up like that. I, however, wanted to be ready to escape, lest these odd predators (apparently intent on eating me a section at a time) were not satisfied with their pound(s) of flesh and decided to start hacking again.

I loaded quite willingly with my brethren, away from that strange place, and back to the ranch. I was sore and tired and a smidge upset. The next day, I was loaded again on the trailer with the same two companions, and off we went on an interminable journey, that ended at Mother.

Now, Mother has told me if that terrible thing hadn't happened, life in Ohio would have had to be quite different. In fact, I probably couldn't have come to Ohio at all. I wouldn't be able to go out with mares, and it would have been difficult for her to have found a place I was allowed to live at. I am not sure why... I am the same horse I always was. If I had stayed in North Dakota, and gotten a band of my own... well, with my leg bothering me as it ended up doing, I wouldn't have been able to keep up with my mares, much less keep all of them from other interloping stallions.

I am glad, though, that I am with Mother... One learns that life is a series of compromises.

And here, there are cookies. There were no cookies in North Dakota. So I guess it was worth it...

* "Target", a dominant blue roan stallion who was born in the Little Missouri badlands circa 1980 and died of old age during the winter of 2001. In his prime, Target was considered an "outlaw" by the National Park Service staff at Theodore Roosevelt National Park, who tried unsuccessfully to capture him for several years. He matured during the height of the NPS program to remove original wild stallions from the Park and replace them with domestic animals. Target built a large harem of mares by taking them from stallions that the Park favored, and became a target of their removal campaign-hence his name. He was finally caught in 1991, and lived for another ten years on the Kuntz Ranch. But he always remained wild, never letting his guard down and relaxing into the relative comforts of captivity. He grew old and grey with his head up and his nostrils flaring, ready to run, at the first sight of a human. ~from www.nokotahorse.org
Posted by Bif at 7:05 PM