Beyond Sloth (or State of the Red Mare Herd, Belated)

Mother has been EGREGIOUSLY remiss in updating my blog. So much has happened, and she just sits there, not telling the world anything.

People care, Mother. Well, people other than you, obviously.

Sadly, Scooter (aka Bert) passed away. He was 31 years old, and while I wasn't turned out with him often, he always was a lot of fun. The humans called him a "troublemaker." 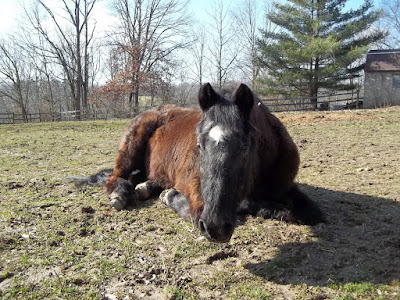 The aunties are down to one house-dog, having lost two since summer from cancer. It's been a bad year for them, what with chickens and the dogs and Scooter.

Bobbie is now living in with Callie, and Belle and I are back to having the run-in for ourselves. Unfortunately, they put up NEW canvas this year instead of simply rehanging the old ones, and I find myself trapped at times because I am not sure where to exit.

You know about Uncle Jeff's visit and the fixation Mother has with the donkeys. Apparently, she now is planning to take them to events out in the world.

Mother, you will be laughed at. I hope you are prepared.

Edited to add: Dancing Donkey asked for more, more, more of the donkeys. Look here for them: The Donkey Chronicles