Before Mother realized I had more holes than just my face, she wanted me to be her "riding horse". She brought me and Devil-in-Pony (I mean Devlin Pony) from Nort

h Dakota and planned to teach us both how to be riding horses. She said Pony would find a new home before too long since she was too lazy to diet, but that she would keep ME! I guess Devlin did find a new home, because I haven't seen him in a long time, although for a while after he left she would come to visit me each day and a lot of times I could smell dust and hair on her that smelled like Devlin.

The hole in my face took a long time to heal, so while 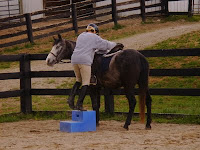 when Pony lived with me Mother would put a funny pad with a belly strap on us, she said to get us used to belly straps. Soon she would saddle us, on our necks and our bellies and haunches and finally on the back, and lead us up next to things to lean on us. Pony Devlin never minded , and I saw her walk around on Devlin and eventually trot and stuff. I just got saddled. Sometimes she would lean on me a little bit but I didn't really like that. It felt funny with the saddle on. It was rigid and not like being petted.

When I met Mother out in North Dakota, the second day she came out to me and put her arm over my back and in her mind I could see pictures of us running along green grass and jumping logs and things I didn't understand. I didn't understand, but I was willing to learn. I didn't know then she meant I would have to wear this saddle and have someone on me!

One day Mother had Aunt Marilyn (she's a nice lady that feeds me) hold me when I was saddled and she leaned on me which I'd mostly forgotten was creepy and then she actually sat on me. That felt odd. It was kind of scary, but OK. The scariest part was when she got off my back. Suddenly she is right along side me when she had been UP THERE. and the sound when her feet hit the ground. Whomp. It was very unsettling.

She did that a few more times over the next days, then one morning Mother had Aunt Karin hold me. I'd only met Aunt Karin the day before, but she is a lot like Mother. After Mother climbed aboard, Aunt Karin started walking with me. I heard Mother say before that the first walk can be dangerous, and I have to say, it's still all very hazy in my mind. I walked quickly and felt little movements on my back as my muscles, which I never noticed before, couldn't move as much because the saddle didn't move and there was more pressure on one side but Aunt Karin let me move along and when I relaxed Mother got off. I didn't understand why Devlin liked this.

So, where's the mountain lion? Well, Mother didn't have anything connecting her to me but the saddle and her legs, and her hands petting me. So that doesn't really count as a ride. So the first ride:

The next day, she had Aunt Marilyn hold me, and she put reins on my halter. Pony used a bit and bridle, but I had my hole in my head, and Mother hadn't taught me... and something about getting pus all over her nice leather. Mother put the reins on the halter because she said I might walk too fast for Aunt Marilyn.

We start walking and my back started feeling weird and I needed to walk faster. Aunt Marilyn couldn't walk that fast, and I ended up walking in front of her, I swung in front of her and there was a fence! I couldn't walk. That is when Mother turned into a mountain lion and I knew I had to get the lion off me very fast or I would die. I taste just like chicken!

I don't remember much of trying to get the mountain lion off. I know I reared and turned and ran, leaping and throwing my body to try to rid it of the lion. Halfway along the fence we had just come I vaguely heard Aunt Marilyn yell, "I no longer have a hold of him!" And from closer, Mother saying, "I'm AWARE!!"

Mother?! Where was she while the mountain lion attacked me? I could hear her calling out to ho-up, but the lion was there, and I couldn't stop. At one point I paused at the fence, I thought I heard her over the lion's breathing, then the lion shifted on my back and I knew he had to go! It was only a matter of time before his teeth and claws raked me to Bif-ereens. I ran, leaping, bucking, launching myself into the air as hard and as fast as I could. After what seemed a long time around the ring, I felt the mountain lion fly off. My head jerked as the halter tightened, and I spun and looked... Mother? Why are you there on the ground? What happened to the mountain lion?
Posted by Bif at 10:41 PM