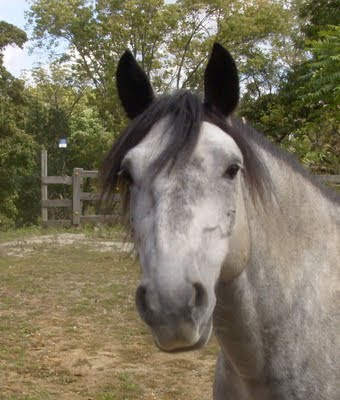 Mother often says I understand English better than most 'farm raised' horses who've been around people their whole lives. She thinks I'm smart. Of course, that is true. But really, the answer is a lot simpler than that...

Like I've mentioned before, I talk with my mind. Words don't make a lot of sense to me, but sensations and feelings and pictures do make sense. I grew up with lots of horse minds all around me, always accessible. Understanding Mother is easy because I just look at the pictures in her mind, the way I would another horse. Her mind is easier to read than most humans, because it is really empty inside.

When I am in her mind, it is a big space with sensations, pictures, all around me. Most of the time they move slowly, one picture at a time and one sensation along with it. Mother's sensations are usually pleasant, so I like trying to be in her mind. Best, it's quiet in there. Like munching grass on a cool morning... yummmm... munch munch munch.

When I am frightened, I can look in Mother's mind and that makes me calmer. Sometimes there are darker areas around the edge that seem translucent yet dusky, and I can almost see pictures there, but I can't really make them out, most of the time. I cannot quite see if the pictures are happy pictures, but I can tell by sound. Sometimes it seems those dark areas have noise, a not nice noise, an almost hissing noise, and that makes me uneasy. She'll notice I am upset, then I look again in her mind, the dark spots are gone, and that is good.

I didn't like many humans other than Mother at first, because there was so much noise in their minds when I tried to loo 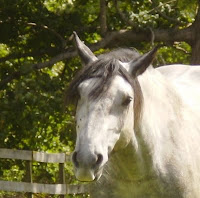 k in. I didn't like them near me unless Mother was there, too, and I could just listen to her mind. Sometimes their noise comes out and finds me, even when I'm not trying to look in their minds. If I physically look at them, they are looking at me. Creepy!

After a while, I got used to other humans' minds and noise. Mother has a noisy mind when she talks on the little black flippy box, and sometimes around other humans at the barn and it makes my head hurt. Some pictures are bad, even though I am not in the pictures. I try to close my mind when she is like that.

I learned that most humans seem to have full minds and lots of noise swirling in them. That doesn't mean they are going to hurt me. They might even give me cookies! Sometimes if they stand near me, their minds seem to get quieter, and I like that. Sometimes I look in them and it is interesting, but I like Mother's mind best.

Of course, if I snort at the right time or prick my ears when she says something about me, my chances of getting an extra Mrs. Pasture's cookie at good night time seem to improve ... cookies... yum!
Posted by Bif at 11:55 PM