The importance of a name 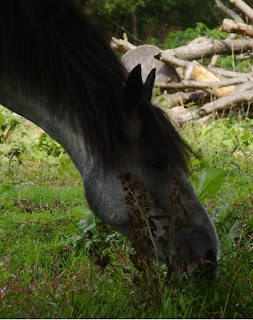 Mother has a little problem... she likes naming things. So everyone I know ends up with a nickname, like Haj or Thippers, or just a really weird name like me.

I know humans often look at Mother oddly about my barn name. "Boyfriend". What kind of name is that for a horse?

It is partly my fault, I must admit. I was out in the bachelor band, which was lots of us Nokotas from several birth years. I had met Mother earlier that August day, but when she came out with with one of the hay feeding men to identify me, I pretended I didn't know who she was because there was someone else there. She called, "Come on, buddy. Come on over here, boyfriend." I'm a boy. I want to be her friend... I backed up from my hay (at the time she didn't know what a miracle that was) and visited with her.

The next morning, she came with another hay feeding man, and I was way at the back of the grass on the pasture, but I heard her call,"Come on, Boyfriend." I didn't know at the time Boyfriend was a different sort of word than just Boy and Friend. Words can be really confusing.

Mother tried to come up with other names for me, but I ignored her. I only answered to Boyfriend. Boyfriend has a certain panache, a certain status other horses will never achieve. It's like I am a person.

Of course, Pony Devlin's barn name was easy to figure out... Devil-in-Pony. Mother said actually, after he had a few "religious experiences", that he was not really so devilish at all. It's a pony thing.

Mother gave him his registered name: Hide the Silver. Some humans said that wasn't very nice, it made him sound like a common thief. Well, I lived with him, he stole my food whenever he could! Mother said it was a fun, mischievous name for a fun, mischievous pony. And that it was hard to see where all of his white (silver)markings were in his wild winter coat. 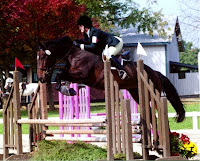 had a horse before she got us from North Dakota. She would always tell me I had some big shoes to fill and would pat me, but I don't even wear shoes. I have seen other horses with shoes, but they seem kind of heavy and odd... and it hurts more when you get kicked by shoes. Any way, after she found out about the hole in my leg and the surgeon's report, she stopped saying that about Cappy's shoes.

His name was Bookeeper. Mother says he was solid citizen, a kind of Clark Kent guy who seemed like your normal, everyday tax accountant, but led a secret exciting life when no one is around, capable of great deeds. I don't think that name makes any sense. Bookkeepers sound boring. And she spelled it wrong.

Then there's me. Mother says there was no reason she should have chosen me from all my relatives. I had an infected, pus-clumped hole and was kind of short and not as pretty of a mover as some of my cousins. But I had chosen her, and obviously needed her. 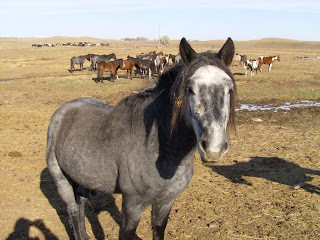 My name is Chant du Coeur. That's 'song of the heart' in French. She chose French because in my great-grand-horses parentage, when we were marched back from the cold north lands after losing our Sioux humans, and arrived a far smaller number than we began, a Frenchman bought the majority and raised and worked us for many of our generations, and she'd rather use a French name than Kicking Feather or whatever.

Mother said in the months between meeting me and her second trip to decide who to bring to Ohio, she always felt like her heart told her to pick me, even though her mind said otherwise. She took pictures of me her second trip, and even though her friends thought it was crazy to pick the holey horse, Mother couldn't help but smile whenever she saw "my sweet face"... she saw me, not my hole.

Now, everyone tells me how handsome I am. Most humans never even notice the scar on my face. They tell me I'm beautiful. And beautiful horses always get the most cookies.
Posted by Bif at 11:51 PM