I was thinking about hay. I admit, I often think about hay. Next to Mrs.Pasture's cookies and grass, and sometimes my grain, hay is the best thing in the world!

Mother doesn't give me much grain. She says I look like a brood mare far along in her pregnancy. Is it my fault that I am from North Dakota and have a very conservative metabolism? 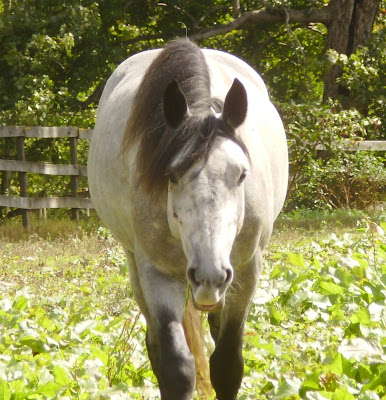 She does give me grain, but not much and it is ruined by all this other stuff she puts in it... weird other pellets, some even taste like seaweed! That little hint of alfalfa isn't hiding much! And other things I don't even know how to describe. She says I have to eat them, that they are good for my joints and that they'll make me more comfortable and that she spends a lot of money on them. Why does she bother? They're gross! She soaks my grain first and mixes all the other stuff in, so I really don't have a lot of choice. But the pellets are better than powder. I hate powder. Unless it's that apple-y stuff Mother calls 'bute'... yum.

Of course, when I first came to her and had a hole in my head, she used to do even weirder things to my grain. She mixed in warm oatmeal with sugar (YUMM!!) but ruined it by this weird tasting powder. Uncle Jeff, my dentist, found out I'll eat my medicine as pills and just chucked them in my grain. Sure, they do taste kind of gross, but I'd rather have a pill I can crunch and just swallow, instead of my whole grain tasting like that...

Fortunately, Mother hasn't found a way to ruin my hay. It's the best!! I like it better than the hay back home... I don't have to share it with all those other horses. She gives me a lot, too, which is VERY important. Some of it is boring, and I don't like to eat that real fast. I like the leafy alfalfa and other really green stuff best, though I don't get nearly as much as that. The boring hay is always there all night long, and I can munch at it whenever I get hungry through the night.

When I first came to Ohio, I would star 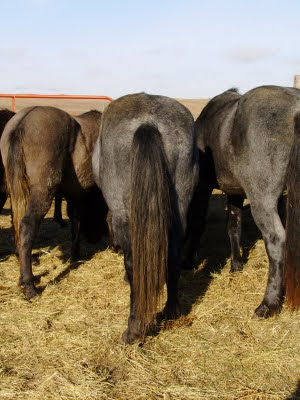 t eating hay, and nothing could stop me. Back in North Dakota, if you didn't eat fast, one of the others would take it.I have since figured out that the hay never stops coming here. I love Ohio. Sometimes, Mother has even bedded my entire stall with hay. Something about low shavings and needing to make room for more hay anyway. I walked in the first time and thought I might have been hallucinating. And really, was I expected to eat all that?

So now Mother is trying to figure out how much boring hay to get for this winter. I want her to get just the green alfalfa-y stuff. I do NOT look like a brood gelding!! Thank goodness she doesn't think cookies make me fat. I'd be lost without my cookies... crunchy, oaty... YUMMM!!
Posted by Bif at 7:59 PM