Why I hate Q-Tips 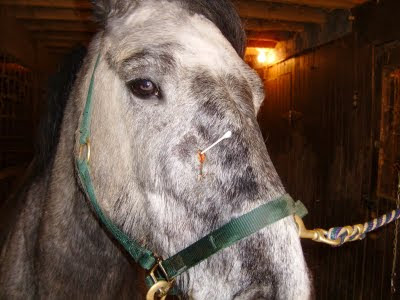 This picture should pretty much tell you why I hate Q-Tips! Trademark be damned! How did a sweet, wonderful horse like me end up in this predicament?

Well, when Mother first met me in August of 2007, I had a small, pus-y wound on my face. At the time, she thought (hoped) maybe it was a small cut that was infected. I was a range sort of horse, after all. When she came for her second visit in November... well, let's just say I was a little crusty... 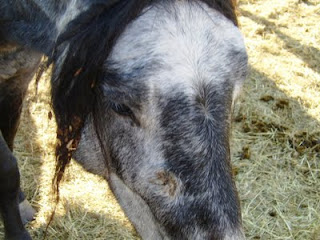 In early December, after Mother decided for sure on me and Devlin, it was time for me to get ready to go to Ohio. There was a human man who taught me about halters and trailers and took me to town to the vet (that's a whole other horrible story!). The vet gave me some antibiotics for the other "operation" being performed on me, and looked at the face and said, "Probably third premolar", and that was all. A few days later, I was in Ohio.

Fortunately, Mother had already called Uncle Jeff, even before she bought me. His real name is Dr. Reiswig, but because I spent so much time with him, I call him Uncle Jeff. Uncle Jeff works on horses' teeth, although he doesn't often have to see teeth as stubborn as mine. Uncle Jeff heard her describe my pus hole, and how much I didn't know about humans, and he said, "These kinds of things can take months to heal up properly. Are you sure that is something you want to get into?" Mother responded immediately with a tiny, "No." She then laughed, "I don't really have a choice. I really like this horse... I can't just leave him out there like that." He agreed to see us on December 31st.
Mother called the ranch and purchased us, we went to the vet in town, then several days and an interminable trailer ride later, I was in Ohio. It was 3 or 4 days before Christmas.

Some other time I'll tell you about my first days in Ohio (It was really hot and balmy! 55 degrees is murder in a North Dakota coat!) and my trips to Uncle Jeff. This is about the Q-Tips.

After my infected tooth got removed... ahhh, bliss! Food was so easy to eat, and I could taste like when I was young, again. This is when I really fell in love with Mrs. Pasture, and her cookies. What a wonderful woman!

Unfortunately, my face had trouble healing, because there were bits of skull that would 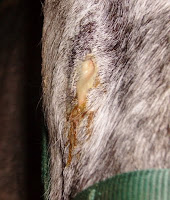 decide not to stay with the rest of the skull, and they would rot and the infection would come out of my hole. Sometimes, both before and at times after my initial surgery, I smelled so bad even I couldn't stand it. Mother would clean it with water and betadine and paper towels or gauze every day, twice a day. Even though she used warm water, I hated it. It hurt! Sometimes she would grab my tongue and pull it aside and peer into my mouth with her little headlamp on her head to see if the plug for my empty tooth socket was still in place. She figured out if she dipped her damp hand in a salt and sugar mix before she grabbed my tongue that I didn't fight very much. After a few weeks, though, even that got really old. I had different plugs in my head for over 9 months, and I never lost one!

And Dr. Jeff recommended using Q-Tips. The Q-Tips with iodine were the worst! Sometimes she just swabbed the outer part with the Q-Tip, that's not too bad. Sometimes she would really swab around in there. She'd sidle up, jab it in, then walk away while I protested. She would walk back up and wiggle it around in my hole! ... AAAHGGGHHH! Other times, Mother even squirted iodine and salt water in the hole. All this while I was still learning about humans! I knew it needed to be done. I felt bad fighting, and at the end of each cleaning I would put my head against Mother so she knew I understood she didn't mean to hurt me. 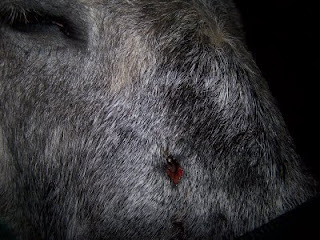 My hole would get better, worse, worse, better. Sometimes it would close and my face would puff, and then it would blow open again. At one point, when the face had swollen before the hole blew open, the open hole was big enough to stick a pencil in, and went kind deep into my head, since I was swollen. Mother fashioned the ghetto-Bandaid, tented over the hole and opened at the bottom for drainage, since it was really windy and dusty and she didn't want stuff flying into my portal. Like it really mattered! It just made the other horses laugh at me. "Flesh colored" means human flesh colored, not me colored... sigh. 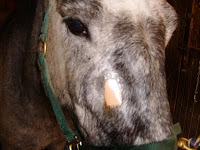 Mother and the vet gave me different antibiotics, my mouth got opened again at the empty tooth hole, and cut open from the top over and over (I am the Great Pumpkin, Charlie Brown! You can carve me again and again and again) and there were lots of x-rays. I made lots of trips to Uncle Jeff and even stayed with him a few times for weeks and weeks, once early in the summer and then again in the fall after I had surgery. They used a really special x-ray that made the bits of my skull that were rotting inside easier to see. I'll tell you later about the hospital stay, but the surgery finally fixed my face, and it took 8 weeks for the inside tooth hole to fill in. I went back to Mother at about this same time last year.

Mother always marveled that I never became even the least bit head shy. Why would I? The hole in my face and the cleaning didn't have anything to do with how she feels about me, and how I feel about her. She wasn't doing it to be mean.

Mother says that is part of why humans think I am very smart, that I am very special. Really, I am just a dignified sort. I only "nipped" her once in all those months of cleaning, and it was really just I opened my lips and pressed my teeth on her hand. That shoul 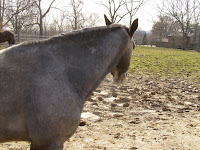 I usually would just keep stretching my head away if I could. She laughed that I was vain, because she couldn't take a picture of the hole side if I wasn't tied up. I would just bend and bend and bend.

I really just want to forget the hole thing happened. Could I have another cookie, please?
Posted by Bif at 10:40 PM