Mother came to the barn yesterday afternoon, hosed me off (I was a little sweaty, I admit), fed me my suppies, and bolted for the hills. No cookies. Ah, well, whatever. At least I got my dinner.

She returned later in the evening with Aunt Margie. She smelled of other horses. Hrrmmmph. She tacked me up, and off we went to the multipurpose. She clambered aboard, and we walked into the good grass pasture. Mother makes fun of me because I don't like walking out through the gap, but I slid the first time we went through that earlier this year. It could happen again. A horse needs to keep his feet, so excuse me if I'm a little cautious.

We walked around to the back fence, and there were occasional loud booms that sound sort of like guns but not quite. They have been going off at times for days now ... what are the humans hunting? Whatever it is they are shooting at, there are either a lot of them to catch or those hunters are really bad shots. I flinched at a really loud one, but Mother seemed unconcerned so I figured they weren't shooting in our direction.

(I must say, later that evening, the hunters must have come upon a whole flotilla/herd/flock/murder/pod of whatever it was they were hunting, because there were shots for 40 minutes straight at one point, and lots of intermittent ones, too. Humans are strange.)

Oh, so anyway, on the way back across the field, Mother started saying "Hi, Dear!" Well, d'uh, I'm right here, and you've been on for a few minutes. Why are you saying "hi" now?  Then there was a commotion to the right, and I saw a deer bolt away. I jumped and flinched, but Mother reminded me she was with me and everything was ok. As we walked on, I still stared towards the deer. Mother rose up in her stirrups, probably to resettle herself as she often does, but at the time it freaked me out... was an alien pulling her up off my back and it was going to grab me next?!? I started to get the hell out of there, but Mother sat back down and told me to "WHOA", so I did. She pat me and we walked on, up towards the gap where Aunt Margie was sitting. But she started making an odd sound with the black thing she was holding.

Aunt Margie's black, clicky thing is scary, and I refused to go anywhere near her, even though she put it away. She obviously still has it somewhere. Mother had me walk out over the branch by the garden paddock corner, walked me in the multipurpose a little while, then leapt off (always kind of freaky) and pat me.

See, photographic evidence of the abuse. I don't think all this carting Mother about can be good for my joint... and if I say I don't want to go near Aunt Margie, she shouldn't insist like that... 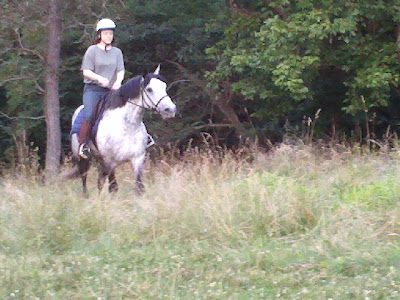 Oh, well, I did get some cookies out of it, and 5 minutes on the lawn. And it's not like she's on me for that long... I guess I'll hold off calling the authorities a little longer...
Posted by Bif at 2:08 PM