So, Uncle Jeff came up today. About three minutes before Mother heard the truck, I heard it and started dancing around in excitement. It's a sound I know well from my stays at Uncle Jeff's while my face was worked on, and I knew what it meant: I was going to my Happy Place.

Yet again, Mother was too engrossed in the proceedings to take photos. Well, of me, anyway. She did end up taking some pictures of my fat donkey.

That's because my fat donkey was sent to his Happy Place as well. Unlike my enjoyment of the Happy Place... well, unfortunately for donkey, a few hours later he had a bit of a bad trip.

Donkey started shivering, muscles a-tremble. A quick call to the vet and a relaying of symptoms seemed to confirm that my fat donkey was having trouble thermoregulating and was very cold. His ears (and other junk) were quite icy. In an attempt to help warm him, one of the aunts brought up a blanket. 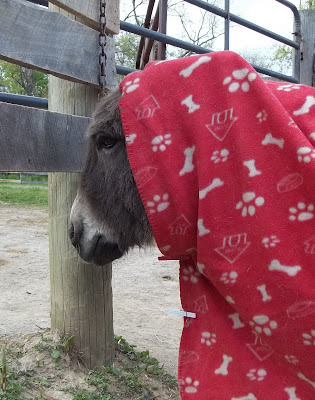 Poor donkey was a little small for his chosen garment. Some creativity was called for in order to secure it. A couple of plastic clothes pins... 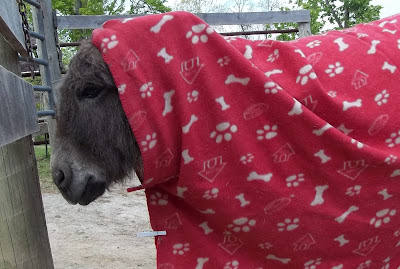 And a well placed knot... 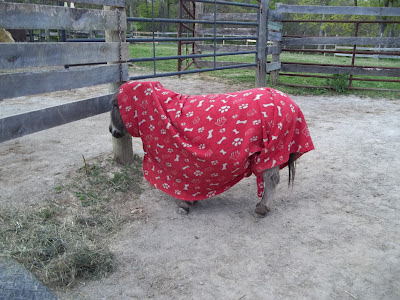 ...left donkey to waddle around less encumbered by his makeshift rug. I don't think he much enjoyed the experience, but as Mother says, even in tragedy, there is often an element of comedy:


He should just be glad Mother's camera died when it did. The blanket alone wasn't helping, so Mother got her super poofy saddle pad and put it on Donkey's back under the red blanket. Then she added her coat on top. Then another coat, tied partly around his neck. He looked like a pissed off homeless woman of Eastern European descent.*

*Not to disparage, stereotype, or otherwise degrade any human or their wardrobe choices.
Posted by Bif at 10:14 PM