Learning how to jump made me feel special. Three mornings a week for First Ride, Her would come to ride me. Her first made sure I would move promptly off her leg, and promptly from a cluck.

The first week I learned to go over a single pole on the ground and then a series of poles, and in between standards and all other sorts of things. One day she made the pole on the ground into two poles that were low in the middle and high at the ends, which Her called a crossrail. My first few attempts at the crossed rails involved my bumping them with front and back legs. It was high enough I knew I should do more than step over it, but low enough I could step over if I needed to. Those rails were heavy and wood and they stung a little, so I learned by the third time through to not bump them. Her told me how good I was, and we stopped for the day.

One of the nice things about learning to jump was I didn't get ridden very long. A lot of times I wanted to keep jumping things and learning, and Her would just tell me how good I'd been and put me away. I admit, I came to like those three mornings a week. Before long, I was cantering to the fences, and then stringing a few together, and it was all fun; except the combination, which I didn't understand and needed more time to think so I took really little strides and put about 5 strides in. Her had Funny Nice Girl ride me the next time, and I was able to understand how combinations worked. Oh, two strides, that's easy. Oh, and I had learned that some jumps will be wider, and how to recognize that; that some jumps have rails that look funny-shaped or are at angles or whatever, but they are all really just a jump and that's easy.

Funny Nice Girl really, really liked jumping me. She told Her that I was so much fun and she thought I really liked my job. Well, yeah, jumping is a lot more fun than carrying beginners around! Her had taught me to figure out how to jump, and to balance myself, and to go at the pace and direction told; if there was a jump in the way, we just went over it and continued on with what we were doing.

I started getting used for the jump practices in the morning, one day a week. It was more work than what Her had had me do, but the riders were Constants and kind and we had lots of fun. That summer I went to He Who is in Charge's home barn and I went to lots of shows, some with little people and some with a Constant.

I spent a lot of time over the next years at He Who is in Charge's barn instead of always at School, and eventually I stopped going to School at all. Her stopped being a Constant, but I would still see her from time to time and I was always glad to see her. She gave me treats and tail circle massages, which are the best.

There are so many reasons it's good to be here. I get turned out all day with my friends (or all night in the summer) and we always have grass and we only do two or three lessons a week instead of a day like I did back at School. 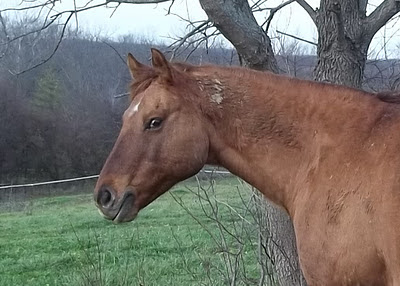 So I'm a little muddy. You have a problem with that??
Her has been around a lot more in the last few months, and sometimes she gets me out to just brush me off and give me a massage, or lead me out to eat the good grass in front of the barn. Her was going to ride me in one of the little shows this summer, but I was sore that day when I got into the sand ring (I warmed up fine in the firmer footing of the other ring) so she rode Jack instead. 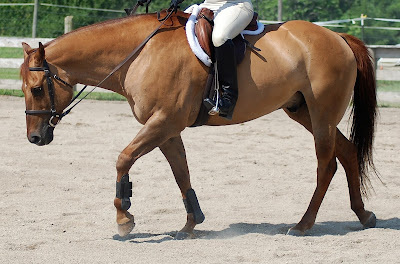 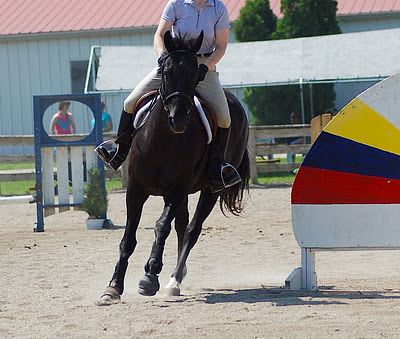 Jack ~ Show off. But I still got cookies, and I didn't have to work.
I'm only sore every once in a while... I still give lessons and jump some, although I admit I feel a little bit stiffer than I used to. My one front leg was cut badly a few years ago, and it is stiffer than any other part of me. I am still the very best horse for jumping without stirrups though, so I am way better than all those tall, silly thoroughbreds.

The other night Her was talking with Little Girl Big, who used to ride me when she was little, although she is not little anymore. Little Girl Big was saying how much she liked me, and that her very first show was on me and she won a championship her first division out. Well, yeah, that's what I do. Little humans seem to like the blue ribbons best, and they really  like the long ribbons. It's good for them to get those long ribbons, because they'll give you even more treats!  And horse shows are so easy: Rider hops aboard, I make sure they know enough to make me go, and then they just tell me how fast we're going and where to go. I love it when there are jumps in the path they pick.