Blindsided: or, How to Startle Your Human

I gave Mother a bit of fright today. It started when she came to bring me in; as we walked into barn aisle I saw the driving lines and brushes waiting. Well, saw them out of my good eye. My right eye was bothering me, so I mostly kept it closed; Mother discovered it was swollen, although not hot, nor weeping, nor any obvious sign of trauma or other disturbance. She sighed.

I am the one in discomfort! Why was she acting put out?

She stared at me, and sighed some more. I didn't really like her touching it, so she decided to give me some of the banana-that's-not-a-banana-but-I-can't-pronounce-it stuff, and forgo the cold packs, since it wasn't warm anyway. The aunts showed up and also peered at my injured orb, declaring that it didn't look like that when I got my mid-day hay.

I patiently accepted the tube in my mouth. I never spit out dewormer or probiotics or banananmeal or any of the other things Mother tubes me with. She went to the the feed room to get me a cookie. She forgot I couldn't see out of that eye, and pet my back as she walked past me. This caused me to, umm, startle, and I launched myself upward and forward, but stopped short so I wouldn't injure the aunts. Well, and technically I hit the crossties, too. While Mother apologized to me and the aunts, this was not the incident that prompted me to educate you on How to Startle Your Human.

So, after scaring me half to death, she gives me a Mrs. Patures cookie... she has been doling them out to me singly occasionally, as my feet haven't bothered me again and my figure has been staying just below what she calls "a thousand weight tape pounds". It's so good to have Mrs. Pastures again..... yummm!

WARNING: Mother told me I should let you know from this point forward that there is graphic content and visuals, so if anyone is squeamish, now would be their cue to stop reading. I don't see what the fuss is about...

Oh, so I eat my cookie, and a few minutes go by, and she starts my dinner cooking, and is chatting with Aunt Carol... when I spit up brown foamy sludge all over my face. Mother stared at me in horrified fascination. Aunt Carol looked quite perplexed. Mother then laughed at me, and regretted not having brought her camera. My aunt took a quick picture with her little phone. I was left standing there, humiliated, a strand of mucousy brown phlemy badness strung from my mouth over my noseband, into my bad eye's lashes and eyelid, even up and into my ear. I dropped a little more of the mystery sludge onto the floor. Mother went to get paper towels. 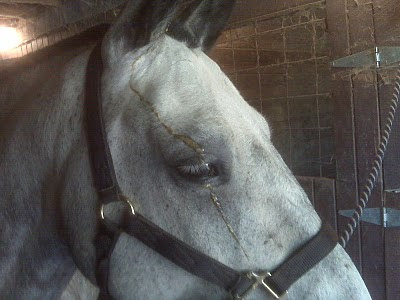 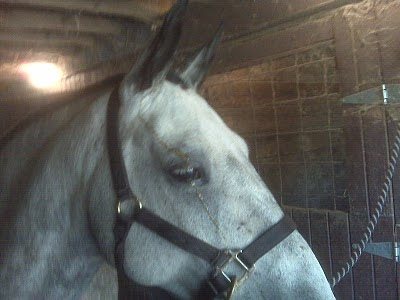 She grew alarmed as I continued to expel brown stringy foamy saliva-y matter. She says it really looked like dog bile vomit, which we know is impossible, because I am not a dog. She wondered about choke, but I wasn't snorting to expel the stuff, and there was nothing by my nose. She decided to put me in the stall, so I could drink if I wanted, and she would observe me.

I glucked up a bunch of clear slimy mucousy saliva as I entered, and smeared it all over my chest and front legs. It was so humiliating. Mother wiped me off with more paper towels, and was staring at me in the oddest fashion. I then proceeded to move my mouth a few times, without producing anything, let out a sigh, and started seeking schnibbles of leftover grain by the doorway.

Mother was flummoxed. If I was choking, this wasn't exactly a normal presentation. My dinner was cooked, and is a soft soaked sort of thing. After a phone call and some consultation, she gave me my dinner... at least we could figure out if it was choke, she said. Um, I don't want to choke!

I consumed my dinner with relish, with normal swallowing the whole time. She fed me a smidge of hay, with no ill effects. She came back a few hours later, and I am still my wondrous, healthy self. My eye even feels and looks a little better. Mother was relieved, but still seemed a touch perturbed by the day's events.

The aunts will watch me tonight, according to Mother, and she promised to come see me early in the morning.

The moral of the story: Apparently, all you need to do to freak out a human is release creepy mucous from your mouth.