Mother says I should let him tell his story. Sigh ~ Boyfriend 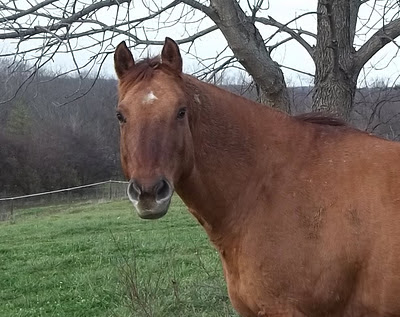 I remember being really little, and I had a big mare that I loved and she fed me. But then we were separated. I don't remember much after that until I was two and went to The Auction.

The Auction was really scary. There were horses there that were very sad and unhappy and it was awful. And the loudness and all the people? Awful. When I left the ring, I was put back in a pen, then led away by He Who is in Charge to a trailer, and that is when my story really began.

I went to a strange barn and then off to Camp. I learned to carry people around. They were mostly really little people.

Then I went to a big place, "School", with dozens of other horses and we stood in our stalls all week except when we were ridden, and we went out to the fields on the weekend. Sometimes there were long periods when we went to farther away fields and were left alone except to make sure we had water, and hay if it was winter. Those were fun times... Then every summer again I went to Camp and carried the little people.

I was named after a student, and I am not 100% sure that it was an exemplary title. Being young and everything, I was... uh, a little bit spoiled when I was first at School; I would nip at people. It was just an occasional (OK, constant) nip to entertain myself, or show my irritation, or... well, who really needs a reason?

A few times a year there were strange weekends where we didn't get to go out to the fields except for the last night of the weekend, but instead stood around with saddles on and went in the ring many times with strange riders. During these weekends, I would bite the person holding me a lot, because I would rather be out in the field, you know? Most of the horses' holders would hold them all day, but I would get passed from person to person. I bit them all.

I only vaguely remember the first time I met "Her". There were many students and they mostly just blurred together. This was early on for me at the school, though, and I remember an evening at the start of School as she walked around being introduced to all the horses and told a bit about each one by another student. She seemed to like me, and commented on my attractive dorsal stripe and zebra marks.

I first really noticed Her because she bit me on my nose. I mean right on my soft, delicate nostril. Sure, I had just nipped her, but OUCH! Every time I tried to nip Her, she would chomp down on one of my nostrils. I quickly realized that biting was overrated.

Her started working in the mornings at the School, and she seemed to take a special interest in me. How nice. Many times I would hear, "Jones- incoming!" This was my cue to turn my head to the side so she could hurl her apple missile into the feeder at the front of my tie stall. Her thought a horse that was nippy shouldn't be hand fed treats. Sometimes she walked in and placed it in my feeder, but we both rather enjoyed the missile game.

My life at School was pretty boring the first 2 years. Lots of people that didn't know what to do or how to ride would ride me and the other horses. It was a constant rotation, although sometimes I would get a larger boy and he would be assigned to me several times. As the weeks went on, the riders would figure things out. Then, one day, it would start all over again with new riders who didn't know what they were doing... sigh.

There were certain people we always saw, well for a few years, anyway, the "constants". These constants usually rode much better, and they often seemed to have favorite horses. I was no one's favorite for a long time, although Her seemed a bit fond of me.

One weekend out in the fields, I was in a bit of a miscommunication debacle with one of the mares. I had to jump over the water trough from a standstill to keep from getting the daylights kicked out of me. One of the constants was down at the fields at the time. Apparently, she told He Who is in Charge about what I did, because Her started working with me a few weeks later, teaching me to jump.

It was the best thing to ever happen to me.
Posted by Bif at 6:27 AM