BFF is really BFFAW (best friend for a while) 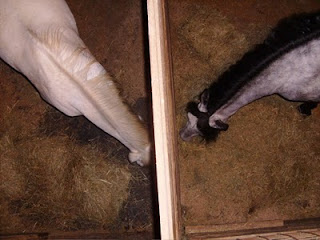 hi. i'm jay. that's my head you see, right there to the left of Bif. he's my friend. we used to be really, really good friends for months and months and months. until when he had some joints "injected" and we stayed in for a few days together. i am "the companion horse", it seems... sigh... i am often left in the field or somewhere to keep another horse happy until it is time to go wherever. but that horse goes first, then i am very unhappy until i get to go wherever, too.

it was great, in a way, being in with Bif while he was recovering. i like going out in the field, but it was so nice to have his undivided attention to just talk and talk and talk...

i guess my talking got to Bif, because after we spent all that time together, he doesn't have much to do with me anymore. i still nicker to him when he comes in at night; he doesn't nicker back. why must it all be so one sided?

before, we were inseparable. well, i didn't like being separated. Bif is a good friend to have. he's not abusive, and he knows where all the best grass spots are. i forget... there are so many other things to keep track of.

see? clearly, in this picture, we are good friends
after the "time together", thing, though, he would walk away if i tried to go visit him in the field. that's not like him. he used to low speed push me around - the humans called it "OJ chase" - because Bif was my friend and i was his and that's what a horse does to show you're his friend, right? since our talks, though, he would just... walk away. i would follow him, but he never stopped. i don't understand.

fortunately, i have good friends still, like Chippers, he's in that picture, too, and Sonney is a good friend. we play chewy face. his face tastes like molasses and grain from his chewy toy in his stall...

and i have human friends. they call me judas horse because i like to come when i'm called. i don't know what the judas part means, but if i come i get grain or pet or whatever, so of course i would come if they call. Bif's person sometimes calls me a special way, she goes LALALALALALALALALA. the other humans say that's not right. but they ask her to do it for them sometimes, because i always come running (so to speak), so i guess it is right.

Rosey mentioned she found the Wi-Fi... now we're passing it around. maybe, if i give it back to him, Bif will be my good friend like we used to be....
Posted by Bif at 7:15 PM