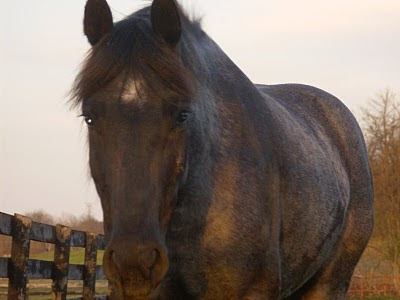 I am a Nokota, just like Boyfriend.
My name is... well, actually I'm a bit confused on that part. I'm Coyote, Blue Man, Little Man, Raising Cain, Romeo, Romies, or Soldier. Aunt Mommie mostly calls me Romeo, Romies or Soldier.

Aunt Mommie is who Boyfriend calls Mother. I want to call her Mother, too, but she says I can't. So I call her Aunt Mommie, and remain hopeful.

Boyfriend very begrudgingly, I mean graciously, let me use his blog tonight so I could tell you about my weekend at the Alien Spaceship. That's how Aunt Mommie described it to some people:
Imagine you're on an alien spaceship. You only know the alien guide who is leading you around, and she provides you with good food and has never injured you, and you've never been hurt when you've been around her. So when you walk around this spaceship and there are hundreds of 500-fanged 6-limbed monsters (with 8 eyes on stalks), you just don't look around at anything but your guide. You're just looking for a clear spot you can walk through, and you follow your guide. Of course, if you saw one of those monsters in your own home, you'd have a terror-filled walleyed fit.
I did not see any monsters quite like that, but I saw things that defied explanation.

We were actually at what the humans called Equine Affaire. We arrived and stayed in stalls with LOTS of other horses around, all sizes, and some strange animals that I think were horses, but I'm not entirely sure. Aunt Mommie made sure I got out from time to time, to walk around and stretch my legs and eat grass. I saw things on those walks I will never forget. There was even a train on rails way above the ground. A lot of times, we just stood around and posed for pictures. 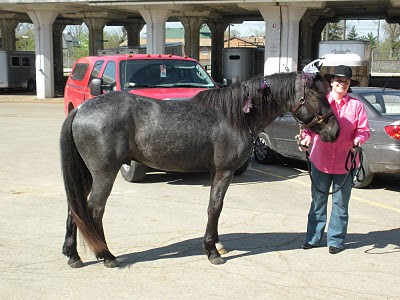 I saw what I thought were itty bitty foals that weren't foals (their legs were too short). One was pulling a human behind it in a bizarre contraption. The more I walked around, the more weirdness I saw. There were creepy fat snakey cables on the ground, and most everywhere we walked was hard, hard ground. There were gigantic horses, and black horses covered in shiny tin, and horses that spun and spun for no reason I could see.  There were painted horses, and little horses that floated alongside young humans like ghostly leashless dogs, and enormous balls that bounced alongside humans. There were humans in every place I looked, and some were in moving chairs or loud contraptions, and little humans were pushed around in more wheeled contraptions. There were horses whose hooves trit-trotted over the ground so quickly I was dizzy. Over it all, the odd smell of sugar and grease overwhelmed everything. I just followed Aunt Mommie.

On one walk, we went into one of the huge buildings, into a small little fenced paddock, and I was pet by many small humans, and everyone stared at me, while Hay Man's voice boomed out much louder and stranger than I'd ever heard it. 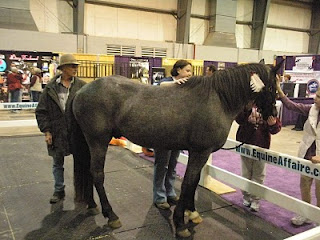 The longer he talked, the more people came over. Lots of little humans... it's something about being blue, I think... 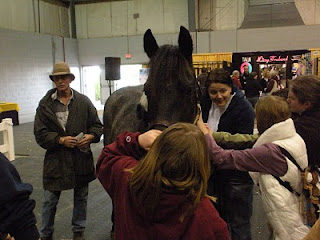 She rode me, too in that strange place, "just for an outing", with lots of humans around. I'd never been ridden anyplace like that, especially not with so many humans around. All weekend, humans everywhere!! 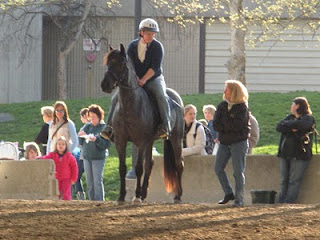 We did a strange talk in a big ring with humans rising almost to the ceiling, and my cousins were ridden around, while I walked along the fence with Aunt Mommie, and stopped to get pet by children (that's what Aunt Mommie says is the proper word for human larvae). Aunt Mommie is waiting to get more pictures of that part; I am trying to forget all that happened!

Aunt Mommie was very proud of me. I should say so! That was a very strange place! I was very happy to be back home again. 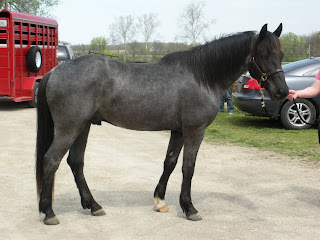 Aunt Mommie says it was very important what I did, letting people know more about Nokota horses, and how affectionate and sensible we can be. I don't know about all that. I just think humans are nice when they pet me, and there was nothing to be afraid of up there. If anything wanted to attack something, it would have gone for one of the gazillion humans around~ I am so fast, it would never have caught me!

And it would have tripped over all those humans before it could get anywhere close to me, anyway.
Posted by Bif at 10:24 PM