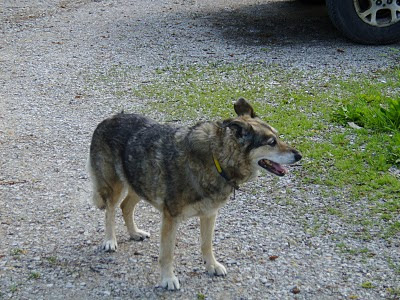 Mother's Sasha is one of my favorite dogs. She actually comes to the barn to visit, unlike the yard dogs, who strangely never go past the driveway, and often bark at me if I go past them on the drive. I can not stand a barking dog. One of the reasons Sasha is my favorite is she never barks at us horses; she would often just make her way past, tail waving, as she went about her rounds of making sure the property line was secure. Her property line seemed to extend well past where my pasture fence ends...

One neighbor mentioned, shortly after Sasha moved in a few years ago, that they thought they were seeing a coyote around more. I cautioned Sasha not to get "shot for coyote", like ranchers might do back home in North Dakota. Since she was deaf, though, I'm not sure she heard me, she just continued on her merry way. I believe the neighbors were informed that she was in fact a "human's wolf".

Mother managed to get a few pictures of her last month. She was frustrated because Sasha was in motion and wouldn't stand still for a good shot. I wouldn't have guessed there was anything wrong with her, other than the deaf thing. 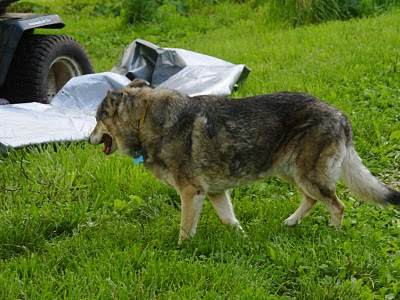 Last week she went on a car ride with Mother and Mr. Smothers, and when she came up by the barn she smelled like the vet who gives me shots, and stitches me if I get hurt. He's nice.

This past week Sasha hasn't been up by the barn at all, which isn't like her, although I saw her occasionally in the yard, and mostly only on the porch in the last few days. She seemed to be spending a lot of time inside the house. Then she went with the humans on a car ride this afternoon.

Today all the humans were sad as they came up to let us out in the grass pasture, and went off by themselves and started digging. I overheard them saying how she had been at least 15 years old, and probably closer to 17.  I heard them use weird words like kidneys and lab values and other things I don't really know anything about. 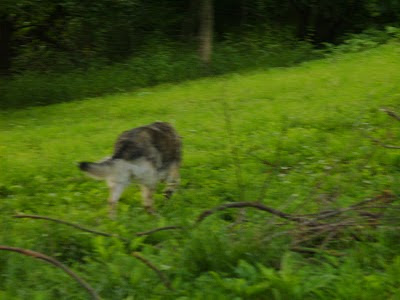