My civil liberties have been infringed upon. Trampled, really. Mother, I now realize, is a dictator. A benign (for the most part) dictator, but a dictator none the less, capable of monstrous deeds. 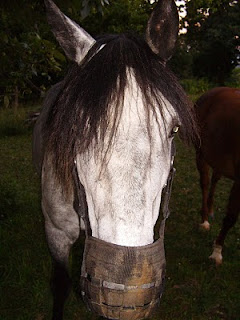 And this thing would not come off!

I sought help. I tried to remove this abomination from my face by rubbing it on Bert. No luck. 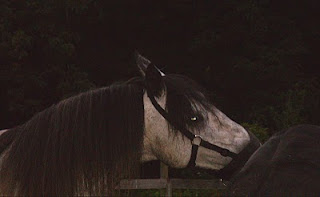 I next tried Belle... surely that would do the trick. But, alas, failure. 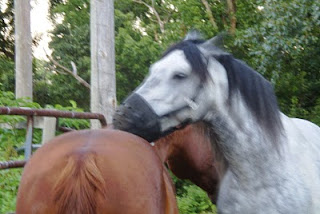 It was very worrisome. I felt like I couldn't breath normally. What if I start drooling, and I drown in there? Mother told me that was silly, as there were all those holes, but it's just creepy, creepy, creepy.

The worst thing about it was not being able to eat. Mother gave me some cookies through the hole in the bottom. She stuffed bits of grass up in there, and hay. So I followed her around, at her mercy for a little sustenance. She told me I could figure it out. AAGHHH!!

And all this because I am a little plump? That is prejudicial, biased and unfair. I mean, look at this, and then tell me I am the fat one: 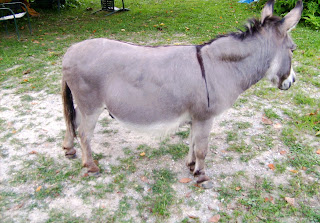 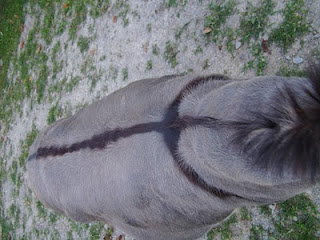 Talk about double standards. What a fat donkey!  I don't have any lumps or bulges like that. But does he have to wear a torture thingy? NO!

Mother says as my care giver (dictator),  it is up to her to best provide for my wellbeing, and I need to shed a few pounds for my overall health, but especially my leg. And true, she only left it on for a couple of hours, it wasn't all night. But what if she leaves it on forever? I would just start to slowly fade away... 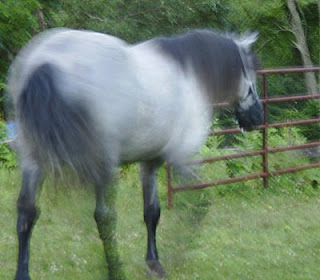 If being less plump is so important, I guess I can lose a few pounds, but there has got to be a better way...

As it is, I fear I shall lose all faith in humanity... or at least Mother. 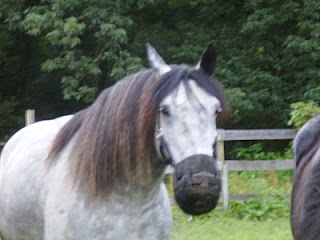 Uh, how do I contact the ACLU? They represent equines, right?