The Aunts and Mother have been fussing with our water trough a lot. It has something to do with the funny piece at the bottom that these troughs always have. Mother says that funny piece it what keeps the water warm. Even though they put a new funny piece in just a week or two ago, the water gets icy and I have to keep it open so Belle and I will get water. The trough in the barnyard stays free of ice, so the funny thing at the bottom on ours apparently isn’t working.
They are battling yet again to remove the funny piece, and said they will put a different new funny piece in. I guess Belle needs her water open.  I, as I may have mentioned before, am from North Dakota.  I know how to take care of these things myself. If there is any liquid water, I will find it.
Back in North Dakota, things were much colder than what humans here in Ohio consider to be “really cold.” Sometimes in winter we just walked out on the frozen water until we broke the surface and then drank. Note: know your water’s depth before attempting this technique.  You only want to use this for large flat puddly ponds, not for anything with depth that may suck you in.
I personally preferred the automatic waterer that was up by the main buildings in the bachelor lot, but I was more likely to run into humans up there, so I didn’t linger, or just went for one of the iced water sources.
When I first moved to Ohio with Devlin, Mother kept us at the sheepless sheep fields and she used a large muck tub for our water. She would drive up at least twice a day and fed us our hay and some oats and filled the water up for us. Sometimes she used the long green hose from the sheep humans’ house. The green hose kind of creeped me out because it looked like an enormously long snake, and snakes should not regurgitate water like that. I have since learned a bit more about hoses.
Devlin thought it was fun and would come over and try to drink the water cascading out of the hose while Mother filled the tub, or he would splash Mother by whipping his head through the stream.
Once the weather turned colder, she didn’t use the hose and house water. She would arrive with big blue containers filled with warm water. She would empty out the muck tub, make sure it was clean, and refill it with water from the blue containers. Sometimes it was nice to drink it when it was all warm like that.Or stick my head in and blow bubbles.
Some mornings when she came up she would marvel at the ice layers she would find in the tub, showing how many times we freed the water and how cold it had really gotten. When we busted a layer, we would drain that entire level. 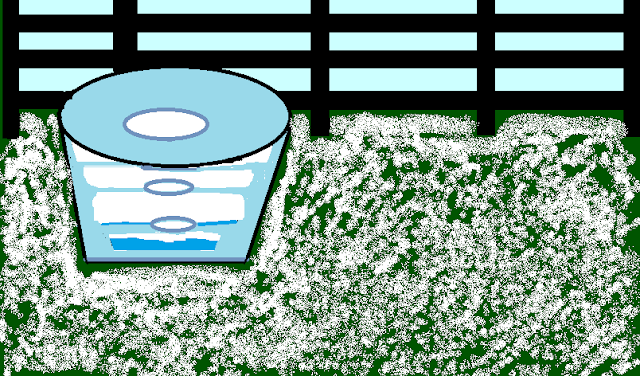 Pathetic Depicition
One morning, as Mother pulled in, Devlin went over to the tub. He looked at Mother then knocked the muck tub over towards him. It started to roll down the hill. Devlin went pronging along behind it, striking it when it slowed, getting downhill of it to try to make it stop, then spinning and chasing it further. Mother stood at the top and laughed like a fool. Then she sighed and went down the hill to go collect the tub to bring it back up and fill it. The next day, she and Aunt Marilyn brought a large trough down for us.
Of course, shortly after that a huge snow storm with ice, bigger than the other snows we had, came but we were up at Marilyn’s barn for that so it didn’t really matter.
Posted by Bif at 7:21 PM