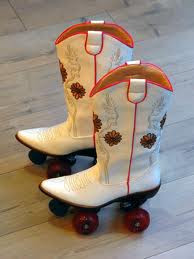 Rather than spend time with me, she went with the palomino human and her offspring to something Mother said was a roller rink.

Apparently, humans strap little carts to their feet and try to stay upright.

That sounds pretty lame to me. And a little creepy.

Mother apparently sustained several injuries from her carting, most prominent of which is a small fluid filled swelling on the bottom of her hoof.

Now she limps around and whines.

She should have stayed here with me and given me cookies.
Posted by Bif at 11:47 PM