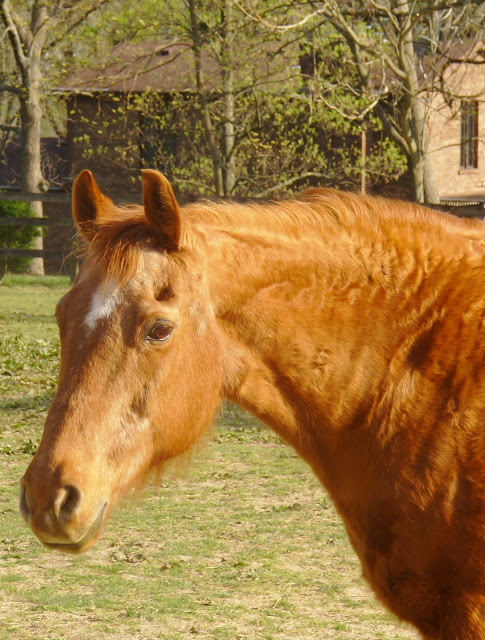 Jeanie, age 32, last year in April 2010
My favored Red Mare, Jeanie, passed away today.
She was bred by a good cow-horse family, bought by the aunts before she was yet two years old, and lived with them over 31 years. Her breeders' son was her farrier for the first twenty plus years of her life. When they decided to breed her, she had two lovely foals by his stallion.
She carried her young owner in the show ring, on the trail, and through life. She willingly shouldered her owner's joys, tears, fears through high school, college, first dates, first jobs.
She carried many small children with grace and exceptional care.
She helped a friend with disabilities know the comfort and joy that it is to be found astride a good horse.
She had a choke that was unable to resolve. It was the first and only choke she had. There was no food in the obstruction; the doctors that treated her think it was a tumor, or a tumor combined with a dislodged and swallowed tooth. She was never suffering, just a bit discomforted, but the answer when the obstruction could not be cleared was obvious, although not easy.
At 33, she still had a shine to her coat, mischief in her eye, and sprightliness in her trot and even an occasional canter.
She has known nothing but love.
What a good mare.
What a good life.
Goodbye, friend.
Posted by Bif at 10:31 PM